Heinrich Goricke was born in Gohlis near Leipzig, Germany, on May 16, 1834, the son of Friedrich Gericke, a merchant, and the youngest of three brothers (his mother died when he was three). While still in school he developed a lively interest in natural history, and was encouraged by his first mentor, Prof. Otto Linne Erdmann. In 1853 he enrolled at the University of Leipzig, where for the next 2½ years he attended mainly lectures by Profs. Erdmann (Chemistry), Carl Friedrich Naumann (mineralogy, etc.) and Wilhelm Gottlieb Hankel (Physics), and worked diligently in the laboratory. He took his PhD exam in Göttingen in 1856 and then, to further his education, he worked at the Conservatoire des arts et Métiers in Paris and also in London.

Returning to Leipzig in 1858, he purchased the small chemical factory of Karl Erdmann (brother of his Professor), and in 1861 relocated it to Leipzig-Lindenau. In 1864 he married Helene Weigel, and together they had two sons and a daughter. He expanded his factory again in 1874, and continued to manage it for the rest of his life. He served as a civil judge in Leipzig for many years, was also member of the Leipzig Chamber of Commerce and was a co-founder of the Elster-Saale-Kanal Society.

In 1856 Gericke published an article on the colors of some minerals in Journal für praktische Chemie. In 1857 he published an article on chemistry in the Chemical Gazette, and in 1878 (in The Chemical News) he complained about the high excise tax on charcoal in Germany. Dr. H. Gericke in Leipzig is listed in 1893 as a member of the committee in charge of the German Chemical Industry exhibit at the Chicago World's Fair. He died after a brief illness on May 14, 1893, two days short of his 59th birthday.

Dr. Gericke was probably also a mineral dealer on the side, considering that some of his labels have prices marked. They carry the imprint: Mineralogische und geologische Sammlung [collection] von Dr. H. Gericke, Leipzig-Lindenau.
Click to images to view larger
To contribute more information please E-mail us at:
minrecord@comcast.net
Citation format for this entry:
WILSON, Wendell E. 2021
Mineralogical Record
Biographical Archive, at www.mineralogicalrecord.com 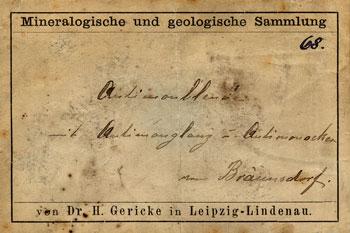 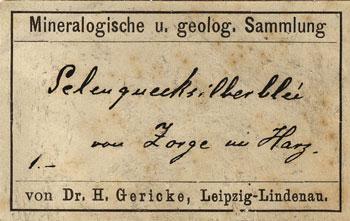 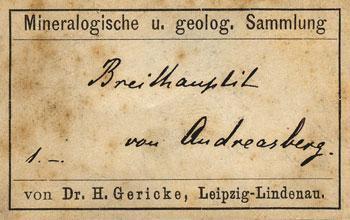