In this autumnal interval between the Denver and Munich shows, there’s a pretty fair grab-bag of items online which deserve attention; I hope you’ll find something to like in the selection here. At the end of this installment, too, you’ll find a recommendation of a new book by dealer Russell Behnke, available online with a free downloading option. So let’s get to it:

By all accounts the special Merelani, Tanzania issue of September-October 2009 (the “Tanzanite Issue”) has been a big hit with readers. This is the kind of comprehensive and authoritative article on Merelani that collectors have needed for a long time, illustrated by a fine collection of beautiful photos of gem crystals—not just of the tanzanite variety of zoisite but also of colorful, and in many cases thoroughly gemmy, diopside, axinite-(Mg), dravite and grossular crystals. The green grossular (“tsavorite”) crystals of Merelani have always been much harder to find on the market than tanzanite, but Mike Keim of the California-based, web-only dealership Marin Minerals (www.marinmineral.com) can now oblige: he is offering 30 loose crystals, from 7 mm to 2.8 cm, of grossular from Merelani. All are very sharp, lustrous dodecahedrons, in colors which vary from pale yellow-green to saturated grass-green. A few of the crystals show smears of metallic black graphite, and one (pictured here) has a 4.5-mm, prismatic, gemmy blue crystal of apatite-(CaF) half embedded on one side. This is the first time I’ve seen grossular and apatite-(CaF) crystals together in a Merelani specimen.

Another item recently posted on the Marin Minerals site is a “new find” of gemmy pale blue jeremejevite crystals from “the Erongo Mountains,” Namibia. Mike Keim is no more specific about locality data than that, but probably these crystals come from work (which resumed in January 2008) at the Ameib 60 Farm, halfway between the village of Tubussis and the town of Usakos, Damaraland. This is where, in March 2001, jeremejevite crystals were found both loose in alluvium and in miarolitic cavities in a simple pegmatite exposed on the surface (see Cairncross and Bahmann, “The Erongo Mountains, Namibia,” in September-October 2006). Mike Keim’s six loose crystals, from 1.3 to almost 3 cm long, are pale blue, lustrous and totally gemmy; some are heavily etched while others are unetched, thick, hexagonal prisms with terminal pyramid and basal pinacoid faces, such that they strongly resemble crystals of aquamarine. Both types of crystals are pictured here: they are, clearly, important representatives of this rare and eminently desirable gem-crystal species.

At the 2009 Denver Show a number of Indian dealers—pre-eminently J.C. Pandey of Superb Minerals India—had supplies of large, very attractive, newly found specimens of “thomsonite” from a prospect pit near Aurangabad, Maharashtra, India, and Chris Wright of Wright’s Rock Shop apparently picked up a few, as several fine “thomsonites” from Aurangabad are now offered on his site (www.wrightsrockshop.com). All of the Indian dealers seemed sure that the material indeed was thomsonite, but Bob Downs of the University of Arizona has tested them with Raman spectroscopy and found them to be mesolite. The specimens consist typically of clusters of pale yellow-brown spheres and hemispheres of radiating acicular crystals, with pure white mesolite “whiskers” bridging the gaps between surfaces of the spheres. Since the individual crystals are thick enough to have terminal faces, the specimens glitter in the light, in contrast to the similarly large but uniformly dull white spheres—which really are thomsonite—seen in the Aurangabad specimens which debuted in 2005. The piece shown here has but a single mesolite sphere (on a bit of matrix covered with stilbite crystals), and measures 6.3 cm across, but some specimens which are groups of intergrown spheres reach large-cabinet size.

The Wright’s Rock Shop site also offers dozens of miniature-size groups of chatoyant, gray to black, loosely intergrown crystals of pyrolusite on massive, dull black pyrolusite—making for much more handsome specimens of the manganese oxide than we are used to seeing. Chris Wright says that these specimens represent the “last hoard” of those gathered by an unnamed field collector “recently” in southwestern New Mexico, and since they are clearly from the same find which was made three weeks before the 2008 Tucson Show, with specimens having been marketed at that show by Les Presmyk and Rob Lavinsky, I can now have the satisfaction of filling in some informational gaps. In the relevant paragraph in my 2008 Tucson Show report, the “field collector” is identified (courtesy of Les Presmyk) as Roy Jones, son of the late Dick Jones. And whereas during Tucson 2008 the exact locality for the pyrolusite specimens was not revealed, Chris Wright now gives it as Akela, Little Florida Mountains, Luna County, New Mexico.

We have known before that the magmatic iron ore (magnetite) deposit exploited by the Dashkesan mine near Gyanzha, Azerbaijan produces nice specimens of several species including chalcopyrite, magnetite, apatite-(CaF) and epidote—but good specimens of the last-named species, which come from the skarn surrounding the orebody, haven’t been seen in a while. Well, I saw some newly dug Dashkesan epidote (and chalcopyrite) specimens with a Russian dealer in Denver, and there’s a beautiful 11-cm epidote plate from the “East quarry,” Dashkesan, now being offered on the website of Hummingbird Minerals (www.hummingbirdminerals.com). Check it out: many intergrown, lustrous fan-sprays of pistachio-green, acicular epidote crystals comprise the plate, to superb aesthetic effect. I am told that we may reasonably hope to see more of these very distinctive epidote specimens in the near future, for collecting goes on at Dashkesan, even though the mine closed commercially in the mid-1990s.

You will hear a contrasting and much darker story, however, if you talk to Romanian traveler Ross Lillie of North Star Minerals (www.northstarminerals.com) concerning present conditions in the famous polymetallic mines of the Maramures district, Romania. The North Star Minerals website (recently much expanded and much improved) offers the bulletin that, as of September 2007, “all mining has ceased in the Maramures district, the pumps are off and the mines are flooded.” However, Ross offers plenty of very good specimens from last-ditch (and some from earlier) mining at Baia Mare, Baia Sprie, Turt, Cavnic, Ocna de Fier, etc. As just one example of a good buy of the get-one-of-these-while-you-still-can sort, I show you a specimen from the Boldut mine, Cavnic, wherein sharp, pure white pseudomorphs of dolomite after calcite huddle together on a pyrite-infused, 15-cm-wide matrix plate.

In the mid-2000s, collecting on the dumps of the old Balcoll silver mine, Falset, Tarragona, Spain produced calcite/dolomite blocks which, when treated with HCl, proved to harbor wires, elongated skeletal crystals, and “herringbone” aggregates of native silver. Some of the silver is blackened by acanthite coatings, but some is lustrous metallic white, and specimens marketed, chiefly by Jordi Fabre, a few years ago reach 10 cm across. At the Denver Show, Kevin Ward of Exceptional Minerals (www.exceptionalminerals.com) picked up a few fine silver specimens from “recent workings” at the Balcoll mine; a miniature-size example from this new lot is pictured here.

By now everyone has seen the gorgeous new specimens showing luminously transparent green, octahedral crystals of fluorite, sometimes to 15 cm on edge, from Riemvasmaak, Northern Cape Province, South Africa (if, somehow, you have not, refer to the well-illustrated article by Bruce Cairncross in July-August 2009). In general, Riemvasmaak fluorite specimens have not been cheap; although the material is now (temporarily, no doubt) quite abundant, beauty carries the day, and drives up the price structure. But in Denver there was at least one great bargain offering of good-quality Riemvasmaak fluorites, and it could be noticed that even high-end dealerships aren’t always charging as much as they once did for the material. Right now, on the website of Wayne and Dona Leicht’s Kristalle (www.kristalle.com), there are some absolute knockout Riemvasmaak fluorites, including the 6.5-cm specimen shown here, which is asking $1500. This isn’t bad, really, for such a stunningly beautiful example from what is clearly one of the world’s greatest fluorite localities ever.

The Xikuangshan mine, Lengshuijiang, Lengshuijian Prefecture, Hunan, China, exploits what is probably the largest concentration on antimony on earth, and is further notable here for being the first of three Chinese localities to distinguish itself for magnificent stibnite specimens. Market supplies of stibnite from the Xikuangshan mine began their sporadic appearances in the 1980s, when China first “opened” commercially to the West, but soon there were distinctly different stibnites on hand from the Lushi and Wuning mines, and after 2000 it was the amazing stibnites of Wuning (or Wuling) which held center stage, with little new coming from Xikuangshan. Thus I was pleased to see that a new Chinese website, MinFans (www.MinFans.com), has just gotten in a good number of stibnite specimens from the Xikuangshan mine, and they are quite fine: clean, brightly metallic, sharply terminated stibnite prisms to 10 cm forming subparallel to jumbled groups without matrix. Unless you like your stibnite crystal groups to be the size of adult German shepherds, in which case the Wuning mine specimens are for you, these new Xikuangshan mine pieces are very satisfactory indeed.

Russell Behnke of Meriden, Connecticut has been a serious mineral dealer for something like 38 years. All his life he has been in love with fine minerals—as fully so as anyone else I could name—and has kept himself up to speed, besides, as an expert Connecticut field collector (Meriden lies not far from the juicy pegmatite swarm in the state’s lower middle section, along the Connecticut River between East Haddam and Portland). I have known Russ since distant-past days when we were both (in our different ways) young and foolish, and it is in a sort of nostalgic spirit that I have kept him somewhere in my scopes during uncounted mineral shows during uncounted years. Now Russ has a website, www.russbehnke.com, on which he’s offering a 144-page book he’s written, called Treasured Minerals, which we are all invited to download in Adobe Reader format for free. Someday, Russ says, he may publish Treasured Minerals in the old-fashioned way, but meanwhile let us applaud his e-generosity, and take a look at the project.
Each self-contained page of the book is devoted to a single topic, with text, photos and other graphics as befit the topic. The texts are informal in tone and mostly personalized in some manner: concerned to convey the feel, and often the genesis, of Russ’s enthusiasm for the subject at hand. The definitions of subjects, and therefore the page headings, ride, it seems, on gusts and cross-currents of spontaneous enthusiasms; the sequence is (broadly speaking) geographic, but the headings, as they come up, include The Garnet from Russell, Massachusetts… Amethysts from Rhode Island…Herkimer “Diamonds”…Some American Chalcocites…Azurite and Malachite from the United States…Gold… Tourmalines from Coast To Coast… Creedite and Silver from Mexico…Gems from Ouro Preto…Pyrite…Rhodochrosite…Carrollite Crystals from the Congo…Some English Prizes…German Manganite and a Mining Woodcut… European Fluorites… Tourmalines from East Asia…Chinese Cinnabars…Scheelite from the Panda Reserve…Morganite from Afghanistan…Mushroom Tourmalines… Giant Crystals of Brookite and Beryllonite from Pakistan…Australian Finds…and so on. 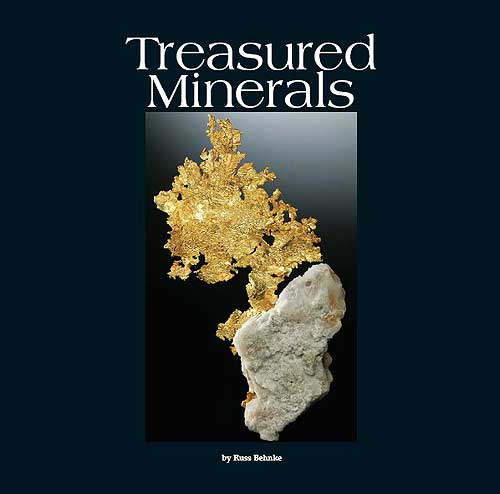 For questions about this column, please email Tom Moore.