Willard Joseph "Perky" Perkin was born in Upland, San Bernardino County, California on April 3, 1907, the son of Alma and Charles J. Perkin, a Canadian-born rural mail carrier. He became interested in minerals during the mid-1930's. At the time he was operating a dry cleaning business, next door to a gift shop which sold items made with natural crystals. The proprietor of the gift shop took Perkin along on a field trip to collect specimens, and other field trips soon followed; before long he was hooked. He joined the Mineralogical Society of Southern California where he made many friends among the other collectors, including an early mineral dealer and desert rat known as "Chuckawalla Slim." He also began trading specimens with Anton Berger (q.v.), a well-known Austrian mineral dealer, eventually becoming Berger's West Coast representative, and turning into a part-time mineral dealer himself.

Perkin became a regular field collector at localities throughout southern California, including the Palos Verdes cliffs and the San Benito County benitoite locality. During the war years he worked as a welder in a defense plant, but much preferred being involved with minerals. In 1949 he took night-school courses in Spanish and then (taking time off from his regular job) he made his first trip into Mexico to collect minerals; his second trip took place two years later, and dozens more trips followed, to famous mining areas throughout Mexico. The specimens he brought back went into his personal collection and also into his selling stock.

Perkin was one of the first dealers to specialize in thumbnail-size specimens, and he had a talent for aesthetically trimming and mounting them. He built a fine personal mineral collection of high-quality cabinet-size and smaller specimens which he placed in drawers and on glass shelves in big glass-fronted display cases lining the walls of a small garage in his Burbank home. He also developed a strong interest in micromounting.

In the early 1956-1959 he worked for three years for mineral dealer George Burnham ("Burminco") (q.v.) in Monrovia, California. While working in Burnham's shop, Perkin was shown a small, cubical, black plastic box by a traveling salesman. It inspired the invention of what became known as the "perky" box, a 1.25-inch box for thumbnail specimens, which Perkin had manufactured and which he began selling to other collectors. When the number of orders coming in became overwhelming he sold the box business to someone else, but the name "perky box" stuck.

In 1971 tragedy struck in the form of the Sylmar earthquake, which shattered the glass cases and shelves in his garage; the beautiful specimens crashed to the bottom of the cases together and out onto the concrete floor amid piles of broken glass. Perkin appeared to take the loss with good grace, but much of his enthusiasm for collecting minerals had died. Soon he began selling off the surviving specimens from the drawers, retaining only his thumbnails and micromounts.

Perkin retired from his regular job in 1977 and devoted himself more fully to travel, mineral dealing and flower photography. He died in Los Angeles, California on November 9, 1991, at the age of 84. His thumbnail collection was sold by his heirs to mineral dealer Keith Williams in 1996.
Click to images to view larger
To contribute more information please E-mail us at:
minrecord@comcast.net
Citation format for this entry:
WILSON, Wendell E. 2021
Mineralogical Record
Biographical Archive, at www.mineralogicalrecord.com 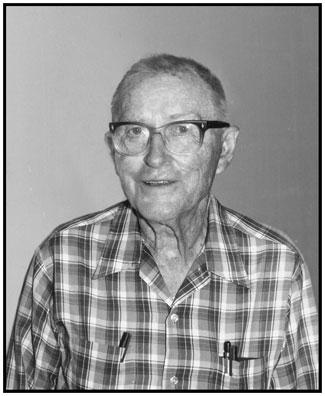 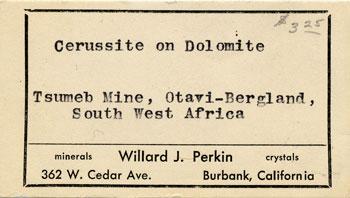 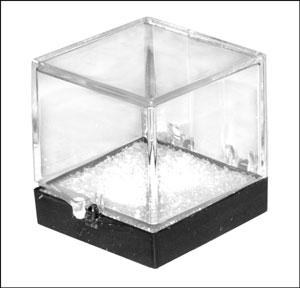 A thumbnail “Perky box” of the kind invented by Willard Perkin 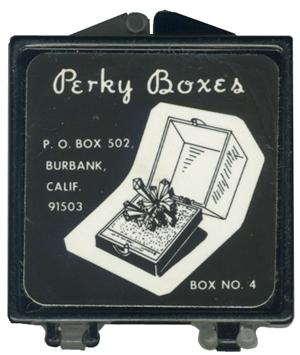 Label on the bottom of a thumbnail perky box. 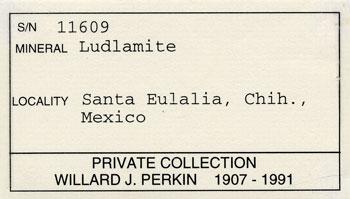 47 x 83 mm,
A label prepared for the posthumous sale of Perkin’s thumbnail collection