Albert Leo "Al" McGuinness was born in Oakland, California on August 17, 1926, the son of Dorothy Wishart and Albert McGuinness Sr., a dentist. Growing up in Oakland, his first encounter with minerals came as a Boy Scout, and he developed a life-long interest. He enlisted in the military in 1944, and afterwards attended the University of California, Berkeley, where he studied mineralogy under Adolph Pabst, and graduated with a Bachelor's Degree in Mining Engineering in 1948. In 1949 he married Joanna Stepanek, and they settled in Portland, Oregon (where children Mark and Maureen were born).

In 1955 Al took a job with the Atlas Powder Company in Butte, Montana selling explosives, and there he met the legendary mineral dealer Ed McDole; they soon became close friends, and spent many weekends together collecting minerals. But Al had to leave Butte in 1958, when he was promoted and transferred to Eugene, Oregon, and then ten years later to San Mateo, California. In 1972 Al gave up his job with Atlas and became a full-time mineral dealer. He field-collected specimens and made many buying trips to Europe, Morocco, South America and South Africa. He became well-known and respected throughout the worldwide mineral collecting community, and sold many fine specimens to collectors, curators and other dealers. He also served for a number of years as the Tucson Shoe auctioneer for the Mineralogical Record, and was the ceremonial co-presenter (with John Patrick) of the prestigious McDole Trophy and the Lidstrom Award.

Al's personal mineral collection consisted of about 950 miniature to small-cabinet-size specimens, and was particularly rich in zeolites from the Pacific Northwest; quartz and uvarovite from California; ilvaite from Idaho; inesite from Hale Creek, California; and the various rare species from San Benito County, California. He collected and recognized as new the species which was ultimately named mcguinnessite in his honor in 1981.

Al's wife Joanna died unexpectedly in 1984, and Al continued dealing in minerals until 1989 when failing health forced him to limit his activities. He retired to Oregon and died there on September 29, 1990.
Click to images to view larger
To contribute more information please E-mail us at:
minrecord@comcast.net
Citation format for this entry:
WILSON, Wendell E. 2022
Mineralogical Record
Biographical Archive, at www.mineralogicalrecord.com 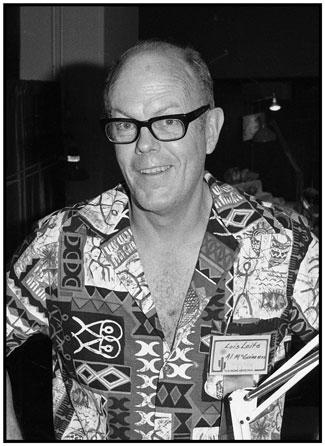 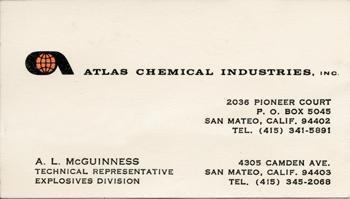 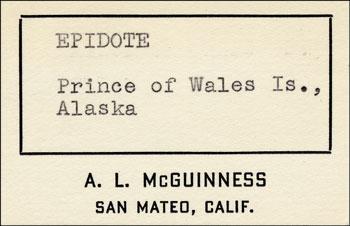 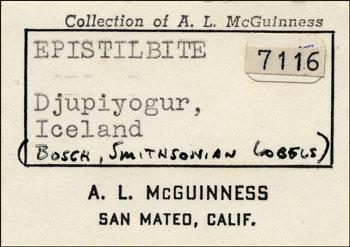 40 x 57 mm,
Over-stamped as being part of Al’s personal collection