Gilbert Joseph Gauthier was born December 24, 1924 in Belgium and acquired a love for mineral collecting at an early age. This led to college training as a mining engineer at the Catholic University of Louvain, Belgium, where he studied under Jacques Thoreau (1886-1971) and became acquainted other mineralogists such as Henri Buttgenbach (1874-1964). Following graduation he taught at the University of Liége for a while before moving to Africa to take a position as a mining geologist and drilling engineer for Union Minére du Haut Katanga (UMHK). His work took him to mines throughout mineral-rich Katanga, including the famous Shinkolobwe uranium mine, where he worked under the supervision of Johannes Vaes (1902-1978). Most of the UMHK technical staff there were also mineral collectors, and Gilbert made many life-long friendships. Eventually he became a drilling engineer and consultant for Africa's growing oil industry, and his services were in such demand that he never really retired.

By the mid-1950's Gilbert's collecting trips had expanded beyond Katanga to localities in Southern Namibia (now Zimbabwe), South-West Africa (now Namibia), Madagascar and other mining areas where he traded Katanga specimens for local minerals. He eventually became a mineral dealer simply in order to dispose of all his collection duplicates, especially when he would buy a collection in order to obtain just a few important pieces for himself. By the late 1950's he was actively trading with various European museums and developing a specialty in antique specimens obtained in these trades. He became a regular fixture at many American mineral shows, including Denver, Detroit, Springfield, Pasadena, Costa Mesa, Houston, Rochester, Franklin, and, of course, Tucson—always with his unique and fascinating stock of African minerals, especially from the uranium, copper and cobalt mines of Katanga. His specimens were meticulously identified and always carefully label, with labels in a variety of sizes to fit his many different sizes of specimen boxes.

Gilbert's defining quality (aside from his mineralogical acumen) was his unfailingly jovial, friendly and charming manner, always with a smile and a laugh. He also enjoyed gourmet food and wine wherever he traveled. He died June 23, 2006.
Click to images to view larger
To contribute more information please E-mail us at:
minrecord@comcast.net
Citation format for this entry:
WILSON, Wendell E. 2021
Mineralogical Record
Biographical Archive, at www.mineralogicalrecord.com 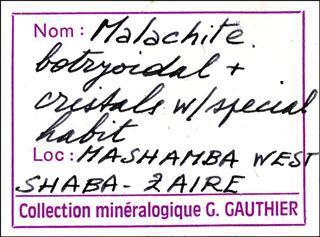 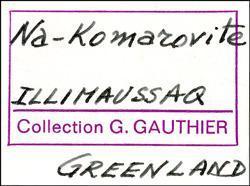 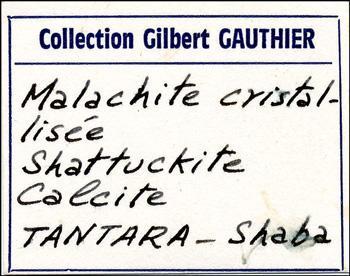 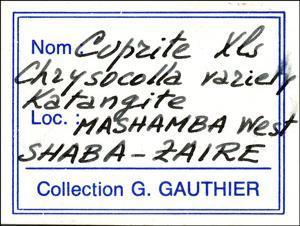 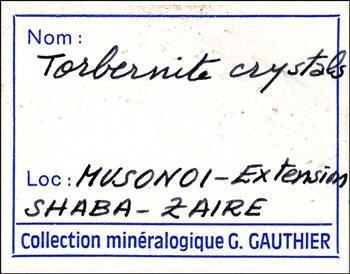 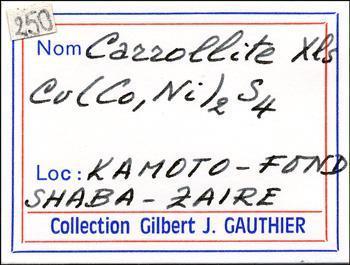 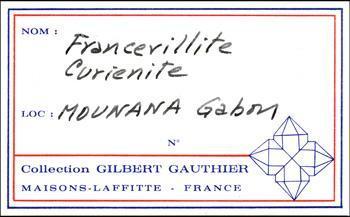