Anton Berger Sr. was born in Krems in the Donau in 1870. The mineral dealership of Anton Berger (junior and senior) was established in Mödling, Austria (about 8 miles SSW of Vienna) sometime between 1923 and 1925. They handled mineral specimens of above-average quality, perhaps attributable in part to the fact that the mineralogist Alfred Himmelbauer (1884-1943) lived in Mödling as well and, like the Bergers, was very well known as a mineral collector. (The Bergers purchased Himmelbauer's mineral collection following his death in 1943.) They leased the Knappenwand epidote locality and mined it for specimens in 1929-1933. Most of the Berger mineral labels were handwritten in their earliest years but around 1929 they started using a typewriter.

In 1934 Sandor Koch, a Hungarian Mineralogist, visited the Bergers frequently during his period of study in Vienna, and described in his autobiography the first-class quality and selection of minerals they carried, especially their Tsumeb specimens, the like of which he had never seen in museums. He was also fortunate to be shown their very special private collection, which they kept " hidden under the bed" to protect it from their regular customers such as H. Karabacek.


Berger supplied mineral specimens to all of the Viennese technical institutes and the mineralogy departments of local museums. In 1935 the Bergers developed a new invention: a screw-operated rock trimmer. In 1938 the elder Berger handed the operation of the company over to his son, Anton Berger, Jr.; he died July 5, 1956, at the age of 86; his son died several weeks before.


Mrs. Marie Luise Berger (born December 11, 1908) operated the business following the death of her father-in-law and her husband. She herself died in 2000. Her three sons sold the collection (private collection and remnants of sale material) in early 2009. The best Tsumeb pieces in the Berger collection were purchased by a wealthy Swiss collector. 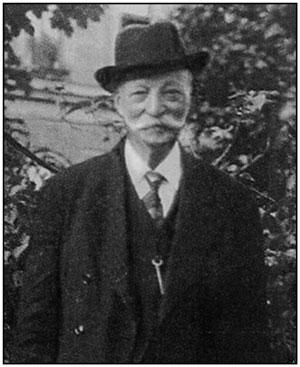 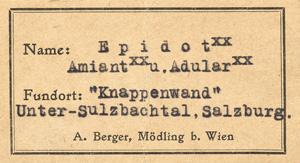 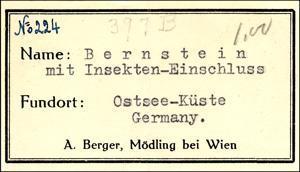 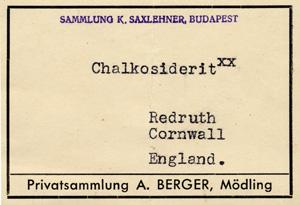 55 x 79 mm,
A label for a specimen from the Bergers’ private collection; this particular specimen they acquired as part of the collection of K. Saxlehner of Budapect. 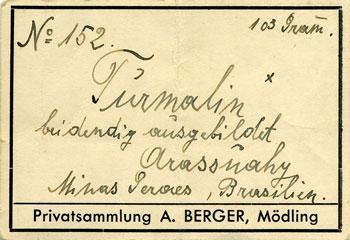 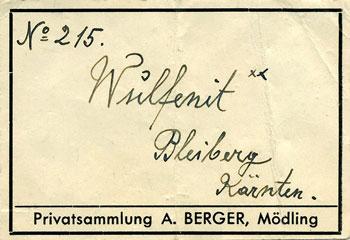 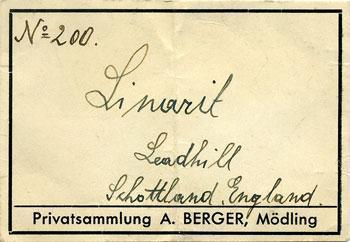 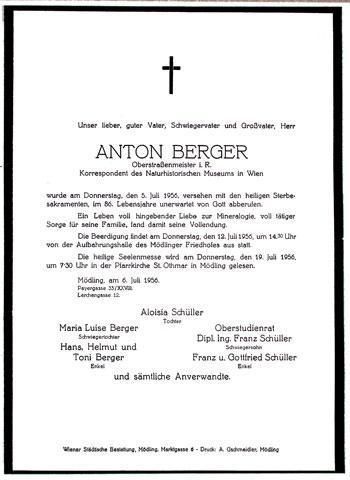