In 1881, English graduated from the Friends' Central School in Philadelphia. Having attended the 1876 Centennial Exposition in Philadelphia, he had become interested in minerals. In 1887, he opened a mineral establishment and worked as an independent mineral dealer until 1903. Due to his expertise in the mineral monzanite, English was offered a position with the Natural Light and Thorium Company, where he worked from 1903 to 1913. From 1913 to 1934, he was mineralogist for Ward's Natural Science Establishment in Rochester, N.Y. For the last decade of his life, he worked as a consulting mineralogist. English held memberships in the New York Mineral Club, the Academy of Natural Sciences, Philadelphia, Rochester Academy (president, 1919-21), and the Brooklyn Institute. He discovered the minerals penfieldite, graftonite, pyroxmangite and skemmatite, and the mineral species "Englishite" is named in his honor. 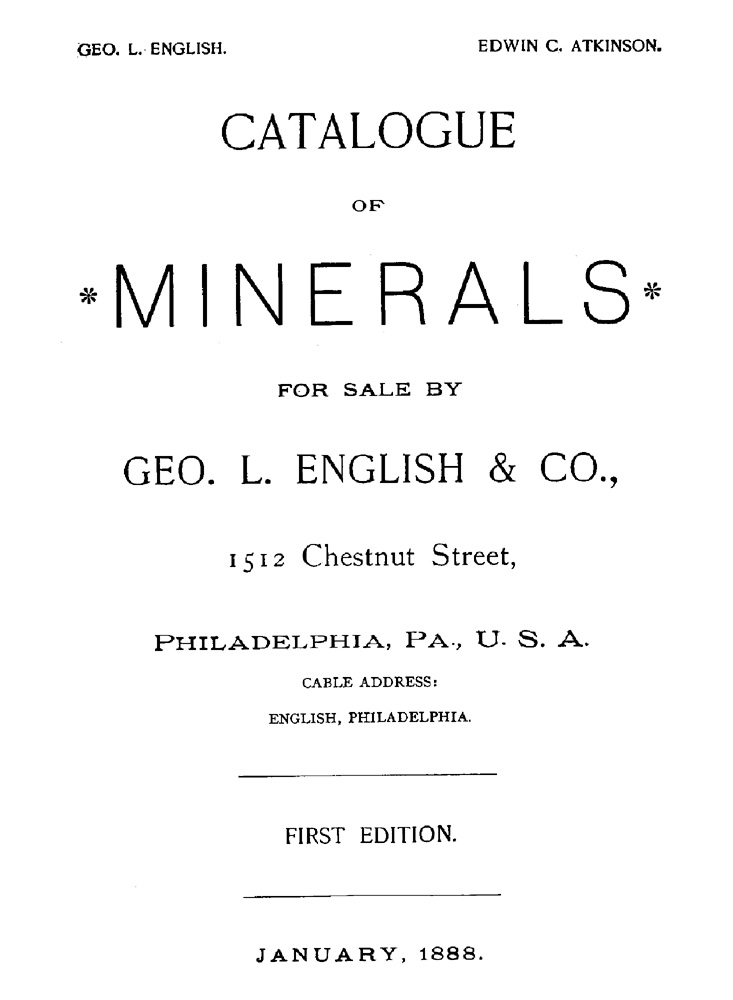 2nd to 14th Editions: Descriptions of the subsequent separate editions of the Catalogues are listed below. However, the second through the fourteenth edition apparently were not published separately. Instead, between 1888 and 1890, English paid for their inclusion into issues of the rare mineralogical periodical, The Exchangers Monthly. They were published at the end of the issue, and sometimes, these lists would account for more than half of the total pages of each issue. Every catalog was introduced with a title similar to, "Geo. L. English & Co.'s Catalogue." No doubt this financial boon to the magazine helped the editor Arthur Chamberlain to keep the venture alive.

George L. English & Co. American mineral dealing firm. Founded in 1887 in Philadelphia by George English in partnership with a fellow Philadelphia mineral collector Edwin C. Atkinson. They had their shop at 1512 Chester Street, issuing their first catalog in 1888. By 1890, Geo. English & Co. had merged with the New York mineral dealer William Niven [1850-1937] to form perhaps the greatest mineral dealing firm of the time. The New York store address was 739 and 741 Broadway, however, by 1891, they had moved a few numbers down and had their shop at 733 and 735 Broadway. In 1892, English assumed sole control of the business, moving to new premises located at 64th East 12th Street in New York about 1893. Geo. English & Co. appears to have remained located at this last address until the stock was sold to Ward's Natural History Establishment of Rochester, New York in 1903. English appears to have continued actively dealing minerals, however, in 1905 he is listed as a dealer in minerals at 3 and 5 West 18th Street, New York. As a side note, Atkinson is listed in Philadelphia with a mineral collection as late as 1905. 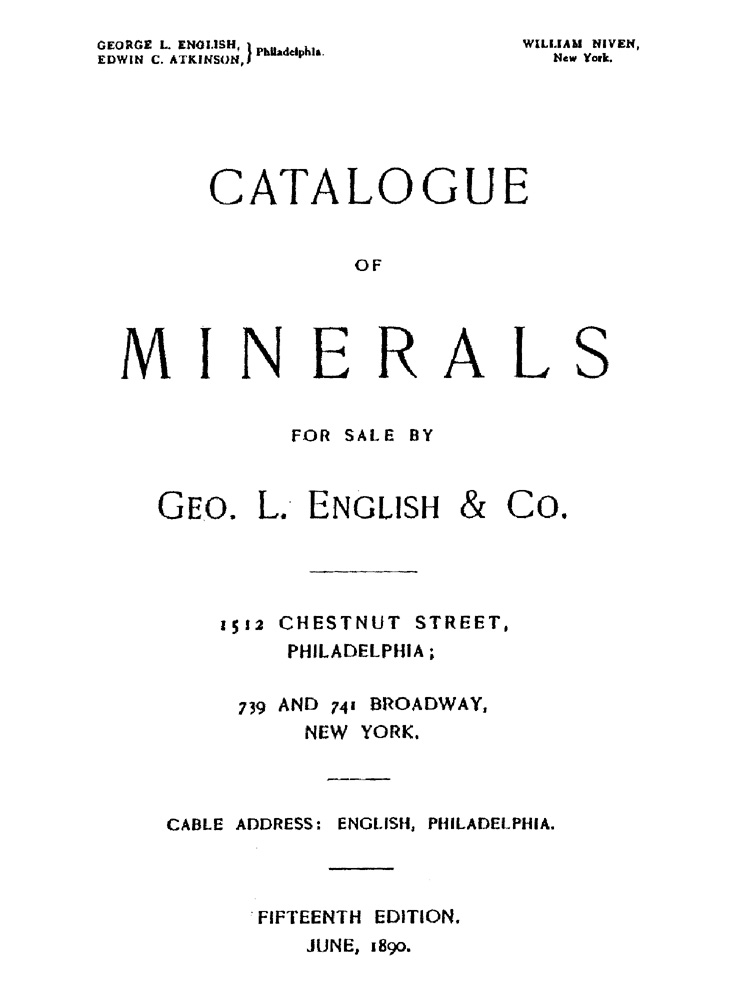 Very scarce. From the Introduction: "Mineralogy has kept pace with allied sciences in the advances of the past ten or twenty years. The very great increase in the demand for mineral specimens, and the general centering of the business in the United States upon our house, have created a demand for a more elaborate catalogue of our stock, which we have endeavored in our present issue to satisfy."

"It is our earnest desire to have an unsullied reputation for integrity and justice, as we believe that upon no other basis can a permanent business be built up. The attention of parties who do not know of our standing is respectfully called to the list (on the following page) of distinguished mineralogists who kindly permit us to use their names for reference."

"The liberal support given us in the past has eneouraged us to very materially increase our stock as well as our facilities for promptly filling the large orders entrusted to us. At the present time we have no hesitation in claiming that our stock is the largest, finest, most complete in species, and in every way the best, in the United States. The recent consolidation of the houses of George L. English & Co., of Philadelphia, and William Niven, of New York, into a new firm to be known as George L. English & Co., is already being recognized as a move to place the mineral buisness in the United States on the highest plane. It will be the constant aim of the new firm to keep no poor material, and while our efforts to secure the choicest of everything often compel us to buy at much higher prices than are commonly asked, an examination of our catalogue will show that our prices are almost invariably as low as or lower than those of other dealers, while the superiority of our material cannot fail to be noticed. This is because we study carefully the needs of all classes of our customers, confine our business wholly to mineralogy, and secure our material direct, personally, or by experienced assistants, visiting the localities and purchasing desirable material in large quantities."

Very scarce. The first supplement to the 15th edition of the author's Catalogue of Minerals (Philadelphia & New York, 1890). It gives a list of new species, with republished notes on various old species, especially of American source.

Very scarce. This catalogue is more than an illustrated price list of minerals. The classified list, with its alphabetical index, presents in classified order the names of all the minerals and their varieties described in Edward S. Dana's System of Mineralogy (New York, 1892). Included are notes about the chemical formula, hardness and specific gravity for each mineral named.

Very scarce. A separately published price list to the 16th edition of the author's Catalogue of Minerals (Philadelphia, 1894). "Every one of the following pages contains fresh matter, the illustrations are new throughout, and a complete revision of all our systematic collections has been made, bringing them up to date in every way."-Preface.

Very scarce. "Special emphasis is laid on the occurrence of minerals in the United States."-Preface.