In 1809, when Dana entered Harvard, he was particularly interested in natural history and already advanced in his chemical studies. During his student years and after his graduation in 1813, he was regarded as a superlative chemist and mineralogist. Consequently, Dana was regularly asked to analysis minerals and devise particular tests. In 1815 he received the Boylston prize for an essay on tests for arsenic. In 1815, Harvard sent Dana to England as a purchasing agent for chemical apparatus. While there, he studied for several months under Fredrich Accum. Returning in 1816, he was appointed to supervise the the renovation of Harvard's laboratory. In 1817, Dana completed advanced studies and received an M.D. from Harvard. Subsequently, he was hired by Harvard as an instructor. In 1826, Dana moved to New York to become professor of chemistry at the College of Physicians and Surgeons. He died suddenly at the early age of 33. 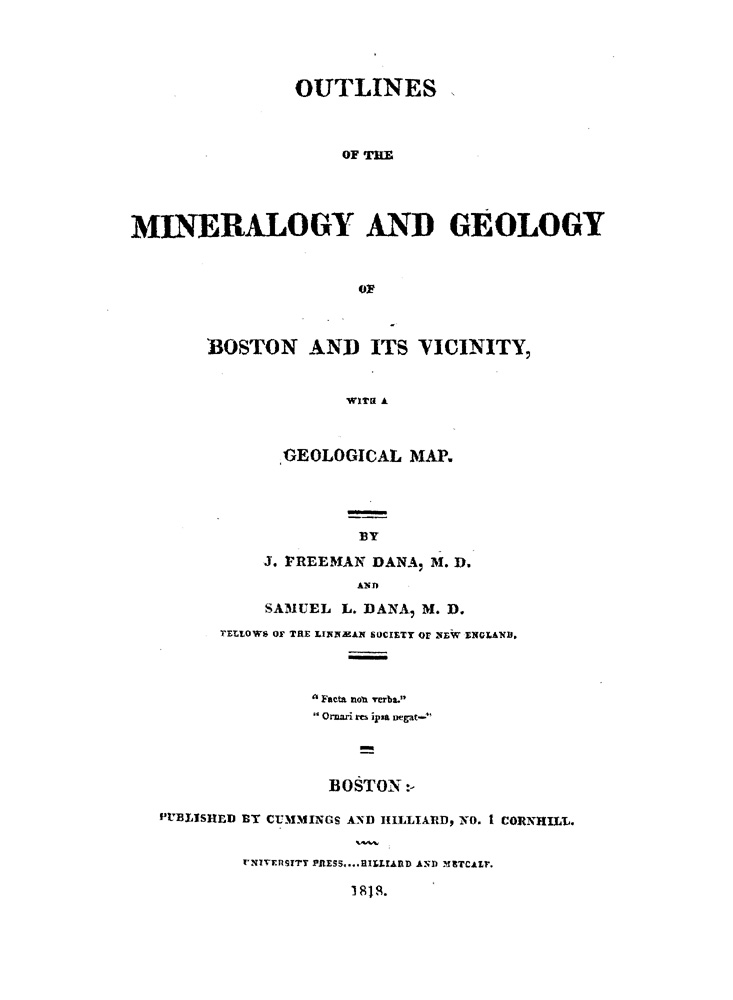 Outlines of the Mineralogy, 1818

Very scarce. Co-authored with Samuel Luther Dana [see note below], this early American topographical mineralogy is a reset, reissue of a work that first appeared in Memoires of the American Academy of Arts and Sciences, Boston (see, 4 1818, 129-224). The Danas provide in this work a detailed and comprehensive introduction to the geology and mineralogy of the Boston area. The authors describe their reasons for writing the book thusly: "It is a common remark, that the vicinity of Boston is no field for the mineralogist. To this opinion we must ascribe the coldness and indifference, with which mineralogy is here treated. On great object which we have had in view, in preparing the following work, has been, to induce an examination of this opinion. It will be found, that more than forty simple minerals, and several rocks occur within a few miles of Boston; and that, if we cannot boast the fertility and variety of mining districts, we may reap a richer harvest, than can be gathered in many portions of our country."

The Danas' account of the mineralogy and geology of Boston and vicinity grouped the minerals into four classes: earthy fossils, saline fossils, inflammable substances and metallic fossils. Among the species identified were lime, quartz, mica, feldspar, basalt, garnet, epidote, asbestos, chlorite, clay, and ores of copper, lead, iron, manganese. Each mineral is given a concise description and locality. Although it is clear from the text that the Danas understood the difference between rocks and minerals, they followed the practice of the time and included the rocks and soils with in the mineral classification. A section on the geology of the area, which faithfully follows Werner, has an accompanying a remarkably accurate map of Boston and its vicinity, indicating in color the surface location of various rock types.

Samuel Luther Dana. (Born: Amherst, New Hampshire, U.S.A., 11 July 1795; Died: Lowell, Massacheusetts, U.S.A., 11 March 1868) American physician. Dana was the son of a merchant and sea captain and brother of James Freeman Dana. He attended Harvard, receiving his M.D. in 1818. He opened a medical practice, but gave it up in 1826 to concentrate on the manufacture of sulphuric acid and bleaching salts. From 1830 to 1840, he was associated with the geological surveys of Massachusetts under Edward Hitchcock. Dana was considered a leading American authority on technical and agricultural chemistry.