Allan accumulated a large mineral collection that was subsequently bequeathed to his son Robert. This collection was later incorporated into Robert Greg's, which is now in the British Museum of Natural History. In 1813, Allan was influential in securing a mineralogy post in the Dublin Philosophical Society for K.L. Giesecke. Allan wrote "Diamond" for the fifth edition of the Encyclopedia Britannica. Allan was elected a Fellow of the Royal Societies of London and Edinburgh. He also recognized a new mineral species from Greenland, which in 1810 was named "Allanite" in his honor by Thomas Thomson. 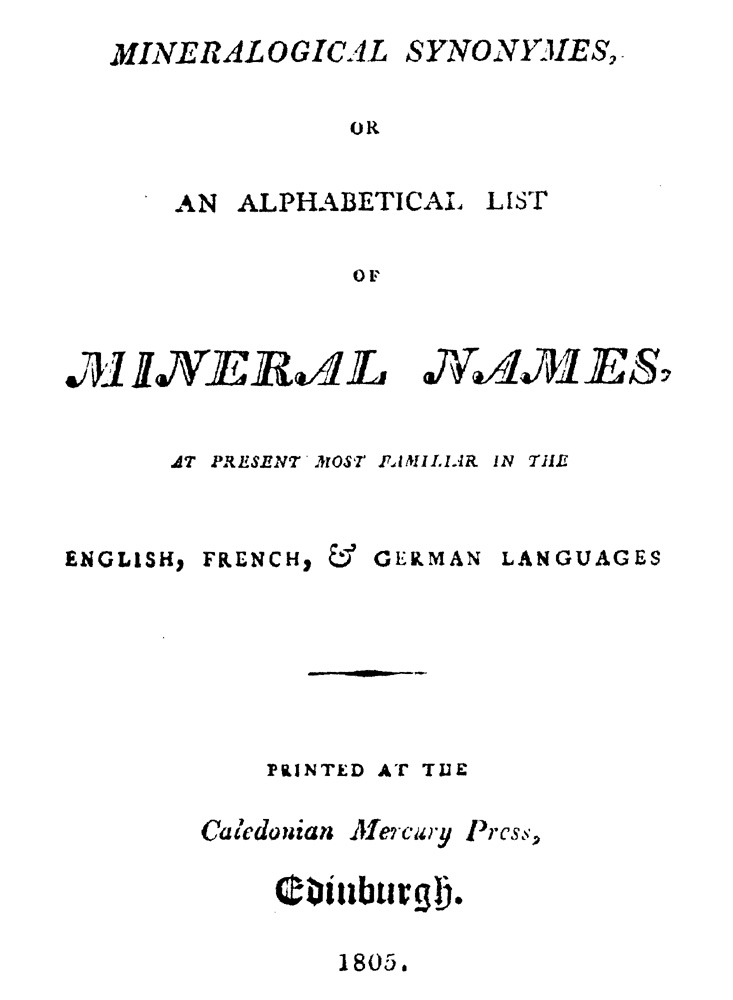 Extremely rare. Published anonymously, but of the same style as Allan's other later works describing mineralogical nomenclature, and therefore attributed to him. The text compares various mineralogical names in the English, French, and German languages. The rarity of this edition suggests that it was a preliminary text, distributed to Allan's colleagues for review and comment.

Rare. Although assigned the title of "First edition" in most bibliographies, this clearly is the second revision after the previous item. The introduction is signed T. Allan. This is one of the earliest attempts in English to compare and clarify the mineralogical nomenclature used by various authors. "As no rules have yet been established, by which mineralogical nomenclature can be regulated, every new work makes a considerable addition to the unwieldy stock of synonymes already in use; and the numerous valuable publications, which have recently appeared on mineralogy, have increased the perplexity arising from this circumstance to such a degree, that the science has been plunged into difficulties, which cannot fail to bewilder, particularly, the young student."-Introduction.

In this work, Allan first gives an alphabetical list of the mineral species names used by Kirwan, Jameson, Haüy, Brochant, Lucas and Brongniart. He has then added tables showing the composition of all the minerals that had been submitted to chemical analysis. These tables are divided into four classes I. Saline, II. Earthy, III. Inflammable and IV. Metallic, with the minerals arranged alphabetically within their respective tables.

Apparently two issues of this edition exist. This one, with "Caledonian Mercury Press" imprinted on the title, is not listed in BLC. Instead, they describe an issue with the imprint of "Canterbury Press" on the title page. 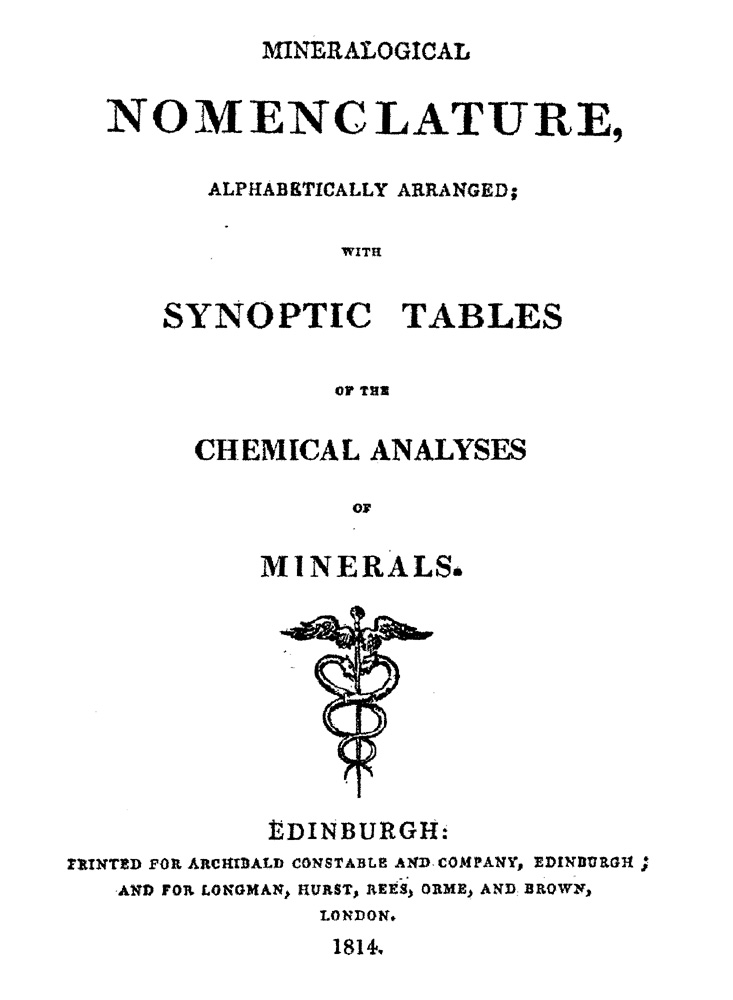 Scarce. The introduction is signed T. Allan. "The idea of this little Work originated in the difficulty I experienced when the study of Mineralogy first engaged my attention. I was then so perplexed with the variety of Synonymous Terms which were indiscriminately made use of, that I was induced to frame a small manuscript vocabulary to assist my memory. This was afterwards committed to the press; and since that time so great an addition has been made, not only to the number of known minerals, but to the original stock of names, that a work of this kind requires to be renewed, were it only to keep pace with the alterations which time has introduced." (Preface).

Scarce. The introduction is signed T. Allan. "In offering a Third Edition to the public, I have only to observe, that there is very little alteration made on the former-farther than the progress of the science has suggested-by the addition of new names and analyses. I have adopted the same system as before, arranging all the leading articles in alphabetical order in the list of names, while the chemical tables are contrived to exhibit a synoptic arrangement of the system." (Introduction).