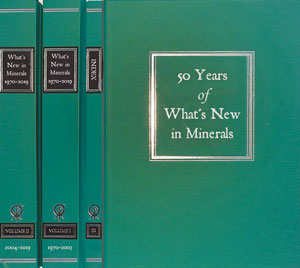 Fifty Years of What’s New in Minerals [NOW IN STOCK!]

What are the features that have made The Mineralogical Record so special over the last half-century? Certainly, a major factor is the regular reporting on new mineral finds as they have reached the market. These reports form an unprecedented database for today’s collectors. Now, the Mineralogical Record has reprinted all of the “What’s New in Minerals” and related columns of the last 50 years in two massive hardcover volumes plus an Index volume, complete with the original illustrations. It can be thought of as a companion set to Tom Moore’s two-volume Compendium of Mineral Discoveries 1960-2015, published in 2017. Whereas the (unillustrated) Moore compendium summarized data from many different mineral journals and publications in that time period, this new reference work provides the full original text of The Mineralogical Record columns, including thousands of specimen photos, many in original full color (black & white for some of the earliest volumes).

Reading through these columns and looking at the specimens again is like a half-century historical tour through the hobby of mineral collecting and a chronological review of the minerals that came out of the ground every year. It reminds us of the excitement that accompanied those discoveries, and provides a great educational background for young collectors and people who are relatively new to the hobby. The learning curve is steep for aspiring connoisseurs, and this compilation is an invaluable resource of critical knowledge.

In serving the community of mineral collectors and mineralogists, The Mineralogical Record has reported regularly on new discoveries reaching the market ever since its first issue was published 50 years ago. Editor and Smithsonian curator John S. White wrote those first “What’s new in minerals?” reports, facilitated in part by his location in a museum where dealers routinely brought their best specimens seeking possible sales. He visited the Tucson Gem and Mineral Show as well, bringing back news of what was on offer there. Dealers and collectors sought him out to tell him of their discoveries, and he documented them for his readers, often with accompanying photos.

Tom Moore, returning in 1991 from a 14-year residency in Germany, began writing more American and European show reports, and was ultimately hired as a staff editor by The Mineralogical Record in 2001. Since that time he has been the principal author of market reports, with occasional help from Joseph Polityka, Wendell Wilson and others. Over the last half-century, 41 different authors have contributed to The Mineralogical Record’s unique body of reportage on the world mineral market—a record that now constitutes a highly important and useful historical repository of discoveries and provenance.

Status as an “illustrated specimen” is always good to know for minerals a collector owns or is considering for purchase. However, after 50 years of publication, many illustrated specimens have lost their provenance. Now that distinction, at least regarding the many specimens that have been pictured in the “What’s New in Minerals” columns, can easily be determined and regained.

THE INDEX: The challenge in utilizing such a massive compendium of columns and reports is: how do you find anything in over 2,000 pages? To answer that need, a 184-page index is included as a third volume, giving full access to all the published information. The Index provides access to every mention in this new compendium, by species and also by locality. When a specimen is found to have been illustrated, the owner may write to the Mineralogical Record and obtain an “Illustrated Specimen” label to go with it, indicating the volume, number and page of the illustration—a handsome addition to the specimen’s documentation.