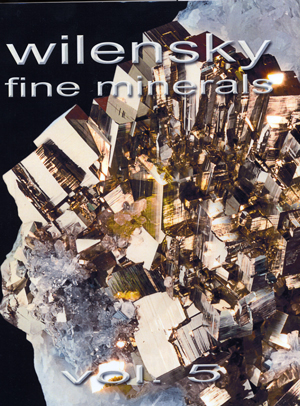 Stuart Wilensky, one of the most prominent American dealers in ultrafine specimens, began publishing a series of beautiful hardcover picture books in 2005. These books, intended for private distribution, depict specimens which he has sold in the past, so none of the pictured items are currently for sale (by him, at least). A dealer’s long-time reputation is based, to a large extent, on the specimens that have passed through his hands over the years, and Stuart decided that he wanted to preserve some record of that. Fortunately he is a decent photographer, and has recorded many of the specimens digitally before selling them, so he has been well prepared to self-publish the books.

Stuart issued this book (the fifth volume in the series) in 2015 and it is impressive indeed — over 140 photos of exquisite world-class mineral specimens, many of them shown from several different angles, in a graphic style unique to Stuart. The captions provide the basics — species, locality and size — and some include references to where photos of the specimen have previously been published. This is not a textbook of any kind; for most collectors it will be just a pleasurable aesthetic experience in the enjoyment of beautiful minerals that have by now disappeared into private collections around the world. However, it also contributes to a collector’s knowledge of what some of the finest specimens of a species look like. And there are some stunners in there that collector’s may recognize from earlier collections. This book is a first-class treat for the eyes.