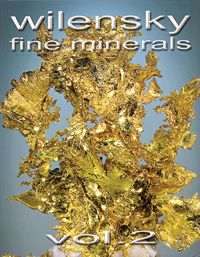 Hardcover, 69 pages
edition, 2005
Published by Stuart Wilensky
Dimensions 8.8 x 11.25 (inches)
Price $30.00
Wilensky Fine Minerals — vol. 2
by Stuart Wilensky
Stuart Wilensky, one of the most prominent American dealers in ultrafine specimens, began publishing a series of beautiful hardcover picture books in 2005. These books, intended for private distribution, depict specimens which he has sold in the past, so none of the pictured items are currently for sale (by him, at least). A dealer’s long-time reputation is based, to a large extent, on the specimens that have passed through his hands over the years, and Stuart decided that he wanted to preserve some record of that. Fortunately he is an excellent photographer, and had recorded many of the specimens on film before selling them, so when the time came he was all set to self-publish the books.

This edition, Stuart Wilensky’s second compendium, contains photos of 76 world-class specimens including many that most people have never seen before, from purple Pakistani vayrynenite to Swiss pink fluorite, purple Ojuela mine adamite, deep green Tsumeb cuproadamite, Joachimsthal proustite, and a stunning Tsumeb azurite/malachite. This hardcover book is a necessary part of any connoisseur’s library of documentation regarding top-quality specimens.