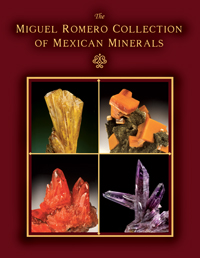 Miguel Romero (1925-1997) gathered the finest collection of Mexican mineral specimens ever put together–over 6,500 specimens, plus an additional 1,500 specimens from worldwide localities. He was given the Carnegie Mineralogical Award in 1992 for “singlehandedly preserving his country’s mineralogical patrimony.” This beautiful book depicts 85 of his most important specimens and provides a biography of Romero.

In the centuries-old history of mineral collecting, Miguel Romero was unique. Many people, of course, have enjoyed collecting Mexican minerals over the years, but he is the sole major collector in Mexico since Fausto de Elhuyar (1755-1833) and Manuel Andrés Del Río (1764-1849) to attempt to build a truly comprehensive collection of Mexican minerals, one that included study-grade specimens, locality suites, rare species and display specimens alike. In fact, although Elhuyar’s collection ended up in the Museo Geominero in Madrid, and Del Río built a serviceable teaching collection for the School of Mines in Mexico City, they never had access to the kind of world-class specimens that Romero was offered, primarily because the culture and skills involved in the collecting, preserving, preparing and marketing of such specimens did not yet exist in Mexico in their day.

In 2008 the Romero Collection was broken up and sold by his heirs. This book is a valuable historical documentation of one of the major milestones in the history of mineral collecting.