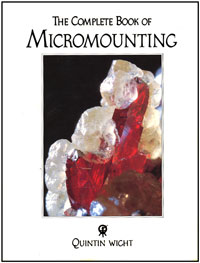 The beauty of the mineral kingdom is most exquisitely demonstrated in the smallest specimens, those requiring optical magnification to be best appreciated. Collecting these microcrystals and mounting them for easy handling and storage is a fascinating and satisfying hobby combining the keen observational powers of the scientist, with the fine eye and delicate craftsmanship of the artist.

In this book Quintin Wight, a widely known and respected micromounter, author, lecturer, and member of the Micromounter’s Hall of Fame, brings together the many diverse facets of mineral collecting at the microscopic level. Chapters cover the history of micromineral studies and collecting from the 17th century to the present; trading and field collecting methods; specimen preparation, identification, mounting and conservation techniques; microscopes; micromineral photography; micromounting symposia worldwide; The Micromounter’s Hall of Fame; and a wide range of tools and equipment useful to the micromounter.

Also included is a color album of 165 beautiful micromineral photographs taken by some of the world’s most talented and skilled specialists. These portraits amply demonstrate the unique allure of Nature’s tiny mineral masterpieces.

This book was in preparation for over 20 years by the leaders in the field. Work on it was begun by Neal Yedlin (1908-1977) around 1972, and was continued by Paul Desautels (1920-1991) following Yedlin’s death. After Desautels’ death it was continued and finally brought to completion by the current author, and the album of micromineral photography was assembled for it by the Mineralogical Record. We can truly say that it is the “bible” of its field, and will most likely never be surpassed.
Wendell E. Wilson
_____________________________
The following review by Joel Arem was published in Mineralogical Record, September-October 1993:

This long-awaited book is truly a labor of love. Begun many years ago by “Mr. Micromounter,” Neal Yedlin, it was a jumble of manuscript pages, notes and published micromounting columns from various magazines when Yedlin died in 1977. The torch was then passed on to an equally famous mineral collector and connoisseur, Paul Desautels, founder of the Baltimore Mineral Society and its annual micromount symposium. Desautels worked on the manuscript for several years, adding his own comments and observations. Unknown to him, a book on micromounting was also being prepared by Quintin Wight, a well-known Canadian collector. In 1990, Desautels turned over all his notes and materials to Wight, who finally accomplished the formidable task of turning more than two decades of miscellany into a finished book.

Wight’s is not the first such book on micromounting; several already existed, including a 1965 work by Milton Speckels and several more in German, French, and Italian. But Wight’s effort is far more comprehensive, modern, and up-to-date.

This book is not only classy and well produced; it is also well written, accurate, and educational. In a sense it is a distillation of the knowledge, experience, and “folklore” of North American micromounting since the mid-1960’s.

Wight has truly done his homework in researching this book. The introduction contains a brief history of microscopic observation of small crystals, starting about two centuries ago. This chapter also traces the origins of micromounting in the United States, beginning with the great collections of Wills, Rakestraw, Bement, Fiss, and Cahn and continuing into the “modern era” and the collections of Boyle, Yedlin, Perloff, Parrish, Hunt, Yost, Desautels, and others.

I have great fondness for this historical material for a variety of reasons. Jack Boyle had been the biggest influence on Lou Perloff’s and Yedlin’s interest in micromounting. Boyle, a great teacher, had many students at the Brooklyn Children’s Museum. His lack of academic credentials led to a fading of support within the museum establishment, a development that eventually broke his heart. Boyle’s legacy, however, was revived when, thanks to Yedlin’s recommendation, I was hired by the Brooklyn Children’s Museum in 1964 to create a new curriculum in geology. There, I found the remains of the once-great mineral collection established at the museum by Boyle, stuffed unceremoniously into a dusty closet! In the late 1960’s, I was a regular lecturer at the Baltimore Micromount Symposium, where I got to meet, to know, and to love almost all the “great names” in micromounting who are described in Wight’s book.

The chapters on collecting (including a great deal of information on the use of explosives!) and identification are extremely thorough and informative and could be profitably used by anyone interested in field collecting minerals (not just microminerals). But the real heart of this book consists of the chapters on preparation, mounting and conservation. A micromounter is not just a collector of tiny mineral specimens. The distinction lies in the art of displaying the chosen micromineral in a box that, by accepted convention, is a one-inch cube.

The fun of micromounting is the challenge of trimming a small mineral specimen to the correct size to fit into such a box and then figuring out how to support the specimen within the box in a way that shows off the specimen to its best advantage, while at the same time being artistic, clever, and unobtrusive.

Two additional chapters, on optics and photography, are virtually unique among gem and mineral books, and their usefulness extends far beyond their specific application to photomicrography. The final sections on micromount symposia and The Micromounters Hall of Fame provide a wonderful means of humanizing this book, by making all aspects of the hobby and its chief protagonists both “real” and accessible.

Wight even provides such elegant finishing touches as appendices that list water-soluble minerals and methods for constructing a micromineral cabinet. A piece de résistance is a photo album with 165 high-quality and superbly reproduced micromineral photographs.

The black-and-white photos in The Complete Book of Micromounting are well selected and great fun to look at in themselves. Wight has done an amazing job of blending the material assembled by Yedlin and Desautels and merging it with his own observations and ideas in a seamless fashion that does not even hint of multiple authorship.

This book is the definitive English-language work on micromounting and will remain so for the foreseeable future.