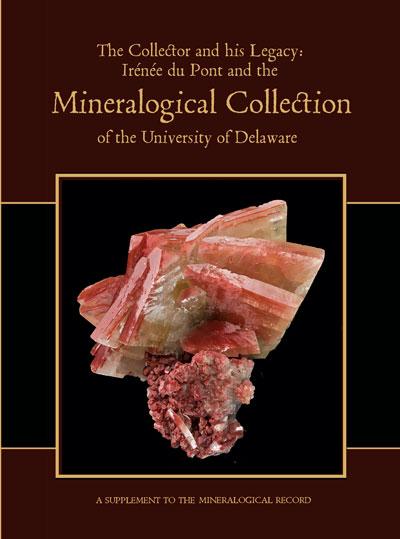 Softcover, 84 pages
edition, 2015
Published by Mineralogical Record
Dimentions 8 x 10.8 (inches)
Price $15.00
The Collector and his Legacy: Irénée du Pont an the Mineralogical Collection of the University of Delaware
by Sharon Fitzgerald

This Supplement to the May-June 2015 issue of the Mineralogical Record tells the story of the University of Delaware mineral collection, including the Irénée du Pont mineral collection acquired in 1964. Irénée du Pont (1876-1963) was a patriarch of the du Pont family of Delaware and President of the DuPont Company from 1919 to 1925. Between the closing years of the 19th century and the mid-1930s he was also an enthusiastic mineral collector, purchasing superb worldwide mineral specimens from famous dealers including George Letchworth English, John Graves, Ward’s Natural Science Establishment, and the great gemologist George F. Kunz.

An eight-page section of the Supplement recounts and quotes from du Pont’s correspondence with Kunz regarding gem crystals of spodumene variety kunzite, of which a remarkable crystal, called the “Pala Princess,” became a centerpiece of the du Pont collection: this crystal is proudly displayed today in Delaware and is pictured full-page in the Supplement. Other examples of “classics” in the original du Pont collection, and also shown in about 40 pages of beautiful photographs, include a 2.2-cm gem emerald crystal from Colombia; a 3.2-cm group of gem-quality willemite crystals from Franklin, New Jersey; many fine elbaite specimens from California; several English barite and “butterfly”-twinned calcites of exceptional quality; a 7.6-cm matrix stolzite from Broken Hill, Australia; a 15.2-cm native lead from Långban, Sweden; and many more.

In the Supplement’s second section, curator Dr. Sharon Fitzgerald gives an account of the du Pont collection after it came to the University of Delaware. Between 1967 and 1997 its unpaid curator, Dr. Peter B. Leavens, worked indefatigably to update the collection and to secure donors and sponsors for its expansion, upkeep and display. Fitzgerald became the curator in 2007, and the renovated museum for the public display of the du Pont collection opened in the University’s Penny Hall in 2009. This second part of the Supplement contains 24 pages of photographs of more “modern” specimens added to the collection since 1964, including some fine and surprising ones from nearby Maryland and Pennsylvania. A bibliography of 50 titles—including 19 by George F. Kunz—concludes the monograph.