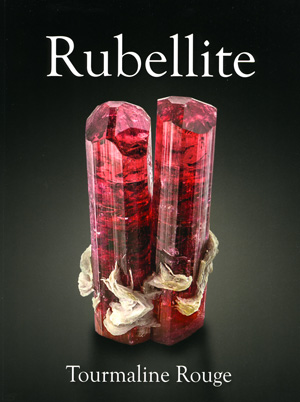 This 20th entry in the distinguished series of mineralogical monographs published by Lithographie, Ltd. just might be the prettiest of them all, as it fairly overflows with photos of beautiful tourmaline specimens, of jewelry and lapidary art objects involving “rubellite” (i.e. red tourmaline, of whatever species within the Tourmaline Group), and of myriad people, places and things associated with this spectacular mineral variety.

Even the several chapters devoted to scientific backgrounds are colorful, as they feature crisp, sometimes nearly page-wide, colored graphics to illustrate crystal structures and crystal morphologies; colored schematics showing the structures of pegmatite bodies; detailed and colorful geologic and geographic maps; and even, facing the Table of Contents page, the now well-known painting by Wendell Wilson which shows (on good evidence) what the greatest rubellite pocket of all must have looked like when it was opened in the Jonas mine in Brazil in 1978. And, of course, many of the great/famous individual tourmaline specimen you can think of are shown in a superfine photo somewhere in this book.

In her introduction, Editor Gloria Staebler muses that this Lithographie monograph is unusual in being devoted to a variety of a single mineral species, rather than to, say, the species elbaite or to the Tourmaline Group as a whole. Well, she notes, back in 2002, Lithographie (then extraLapis English) published Tourmaline, but that monograph has been out of print for a long while, and anyway it seemed time for some sort of diversification or new perspective—19 new species of the Tourmaline Group have been described since 2002, after all. The core group of experts who volunteered to help Gloria with this new project did so because, as she writes, “a study of rubellite [alone] would offer a better opportunity to express the nuanced and fluid nature of the tourmaline group minerals. Plus rubellite is gorgeous!” Indeed.

A simple list of the chapters and of their authors should show (with but minimal commentary by this reviewer) how thoroughly and authoritatively the work addresses its topic. First comes “Rubellite, a Historic Gem” (by Gloria Staebler), featuring photos of the Crowns of Saint Wenceslas and of Tsar Ivan Alexeivich, from the 14th and 17th centuries respectively, with “ruby” gems which are really rubellite gems set into them, and featuring the valuable knowledge that Theophrastus (361-287 B.C.) believed tourmaline to have formed from hardened lynx urine.

Then come the four “scientific” chapters, all very well and clearly written, and with beautiful graphics as already noted: “The Tourmaline Group” (William B. Simmons), “Tourmaline Chemistry” (Alexander U. Falster), “Color in Tourmaline” (George R. Rossman), and “Pegmatites: The Source for Gem Pockets” (William B. Simmons). For me the highlight of this part of the book was the listing by Simmons, on page 15, of the 40 species now known to belong to the Tourmaline Group, this listing framed all around by straightforward text, many ternary diagrams showing compositional interconnectings and blendings of species, and, of course, specimen photos—although one does have to wait all the way to page 131 to see what the species darrellhenryite, described in 2013 from a locality in Bohemia, looks like.

The next ten chapters explore individual localities, or provinces, or whole countries, which have been productive of fine rubellite. The stops on the tour include not only the predictable ones—“Rubellite from Elba” (Federico Pezzotta), “Pala Pink and Mesa Grande Mauve” (Ryan Bowling), “The Dunton Gem Quarry” (Karen Webber, William Simmons and Alexander Falster), “The Jonas Mine” (Odulio José Marensi de Moura)—but we also learn, perhaps somewhat to our surprise, of “Rubellite from the Czech Republic” (Jaroslav Hyršl and Milan Novák), “The Abuja Mine, Nigeria” (Odulio José Marensi de Moura), and “Hidden Charms: Rubellite from Vietnam” (Dudley Blauwet). Then there’s “Russia’s Famous Siberite” (Peter Lyckberg), recalling the recent Mineralogical Record special issue on the Malkhan, Siberia locality but also covering the older localities in the Urals, 3,000 kilometers to the west; and there’s “Rubellite in Madagascar” (Federico Pezzotta), with a gratifyingly detailed map showing ten individual “mine” workings in the central part of that country, to help us clarify our labels; and there’s “Serra Do Cruzeiro” (Odulio José Marensi de Moura), with separate discussions for the three distinct mines of the Cruzeiro district in Minas Gerais, Brazil and a great deal about the mineralogy of the pegmatites there.

A final “locality” chapter called “A World of Rubellite” (Sarah L. Hanson and Friends) consists of brief descriptions of other places which have produced notable rubellite, arranged alphabetically by country, from Afghanistan to Vietnam (the U.S. subsection has sub-subsections for Connecticut, California and Maine). These descriptions, although few are longer than 20 lines or so, are conscientious about naming specific localities—“big” ones like Paprok, Pederneira and Alto Ligonha, for sure, but also, for example, the Forrestania Rubellite mine in Australia, the Amerika Mine in Germany, the very newly discovered locality somewhere in the Drâa-Tafilalet region, Morocco, and such dreams-are-made-on locales as Trascastillo, Andalucía, Spain, where “Red or polychrome crystals, similar to those found on Elba, as long as 2 centimeters were recovered from a few rare pockets.” This monograph probably is the best, most up-to-date, collector-oriented accounting of worldwide localities for red tourmaline that can be found anywhere.

A Bibliography of about 175 titles completes the package. And the print quality is outstanding, the paper heavy and sleek. And did I mention that there are hundreds of beautiful photos and graphics?