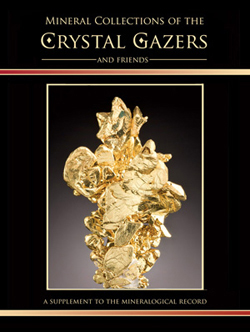 Our supplement to the November-December 2013 issue is devoted to the Mineral Collections of the Crystal Gazers and Friends. This 136-page book gives an inside look at 24 extraordinary collections belonging primarily to members of the 43-year-old San Francisco organization known as the “Crystal Gazers.” Over 400 specimens are pictured, most of which have never been illustrated before or even displayed at mineral shows; normally the only way to see these specimens would be as a guest in someone’s home.

The group’s overall focus has been described in founding member Jack Halpern’s “Criteria for selecting crystallized minerals for a display,” published in the Mineralogical Record (March-April 2005). The superb specimen photography is mostly the work of master photographer Jeff Scovil. Steve Smale, another member of the group, has previously published his own book, The Smale Collection: Beauty in Natural Crystals (2006), and adds to the documentation of his remarkable collection via his chapter in this new work. Other members have built their collections according to their own criteria, resulting in an interestingly eclectic assemblage of differing styles of collecting. Some concentrate on particular species, others on brilliant color, on rarity, on qualities such as gemminess, on certain geological environments (such as pegmatites) or on favorite localities.

This book is fun to read, as you get to know these California collectors and see some of their favorite specimens.