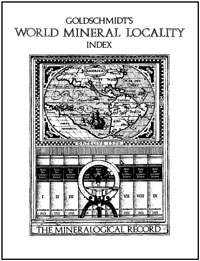 Some years ago the Mineralogical Record Library was favored with a gift from F. John Barlow and Forrest Cureton: a complete set of Victor Goldschmidt’s Atlas der Krystallformen. This work subsequently proved to be of great value to us, as a source of crystal drawings to use as illustrations in articles on famous mineral localities worldwide. The principle difficulty was that Goldschmidt’s Atlas is arranged alphabetically by mineral species, whereas our need was typically for crystal drawings of any species from a particular locality. Consequently it was necessary to go through all nine volumes of the supporting text, page by page, in order to extract all the drawings representing a specific locality. This was so impractical that it became clear a locality cross-index was needed.

A notice for volunteers published in the Mineralogical Record brought seven responses from people willing to help, who each had access to a set of the Atlas. Volumes were assigned and everyone set to work. All entries (except those for synthetic crystals) were painstakingly copied out, mineral names were translated into English, and countries were determined where not noted (Goldschmidt assumed a familiarity with European geography that few people today possess), along with the volume, page and figure number for each crystal drawing.

The transcriptions were computer-sorted by locality and then edited. The transcription was a surprisingly difficult task. Goldschmidt had a confusing habit of sometimes noting more than one locality for a single drawing; thus, for an entry like “Liederschnitz, Smolenberg Valley,” one had first to determine what country they were in, and secondly to determine whether Liederschnitz was in Smolenberg Valley, the latter term modifying the former, or whether they were intended to indicate two different occurrences. In a few cases the two (or more) were found not even to be in the same country!

Another problem was the extensive changes in European geography that followed the two world wars. A great many locality names are no longer to be found on modern maps, and many occurrences have come to be included in different countries from those noted in Goldschmidt. In general, we indexed according to the original locality name (to facilitate rechecking with Goldschmidt), but using the current country name if possible. (However, the sorting between Hungary, Romania and Czechoslovakia probably needs further updating.)

We have by no means solved all the mysteries behind the localities cited in Goldschmidt. Some may be “lost” localities, others may require extensive study of Goldschmidt’s original references as cited in his text volumes. Such research was beyond the scope of the index.

Although the index was originally required for internal use by the Mineralogical Record, it provides such a comprehensive look at pre-war mineral occurrences around the world that we felt it should receive wider distribution. This is particularly true following the reprinting of Goldschmidt’s Atlas some years ago by the Rochester Academy of Science, which removed the work from the “rare book” category and gave many readers new access to it. The index by itself is nevertheless a useful reference on mineral localities worldwide, even for readers without access to the Atlas itself. Consequently we have published it as a 48-page softcover book.

A cross-index by locality of Goldschmidt’s Atlas should naturally be very useful to people involved in the study of the comprehensive mineralogy of specific mineral localities. In combination with Goldschmidt’s text volumes, it can provide quick access to the early mineralogical literature on a given locality. But it is unique in its own right for the species lists of the various localities worldwide that produced crystallized minerals before 1923. The lists do not include all those species that were found massive or unsuitable for goniometry, but probably reflect a major portion of museum and private collection species available for study before that time. Thus it implies something not only of the mineralogy but of the history of specimen availability and of mineralogical research at various localities in the nineteenth century.

As a final note on its usefulness, Goldschmidt himself noted in his preface to volume one that the Atlas der Krystallformen “will also be welcomed by mineral collectors and mineral dealers. It will allow them to judge the value and significance of their collections, and will help them make better decisions on new acquisitions.” For those who specialize in specific localities, similar benefits may result from this locality cross-index.
Wendell E. Wilson