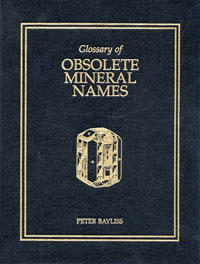 Nomenclature is fundamental in any science. New terms and names are coined as need arises and discarded when they become obsolete. The mineral kingdom [has recently passed] 4000 recognized species but keeping current is easy because Fleischer’s Glossary of Mineral Species, begun in 1971 and now in its 8th edition, has become the standard reference list for mineral names accepted as valid species by the International Mineralogical Association’s Commission on New Minerals and Mineral Names. This companion to Fleischer’s Glossary from the same publisher is a multilingual list of more than 30 000 discarded names, the refuse of several centuries of the scientific study of minerals.

Glossary of Obsolete Mineral Names includes synonyms, varieties, mixtures, field terms, doubtful and discredited minerals, synthetics, unstable high-temperature polymorphs, and hypothetical end-members. This volume competes directly with de Fourestier’s (1999) Glossary of Mineral Synonyms published by the Canadian Mineralogist, which I reviewed in American Mineralogist, v. 85, p. 1570. The two differ much more in style than in substance. Bayliss is a serious reference work with a no-nonsense look. It consists of 235 pages of one line entries arranged in double columns of 78 lines, whereas de Fourestier’s 448 pages have a less dense, pleasing-to-the- eye graphic style of triple columns in a larger, sans serif font. Save for the crystal drawing embossed on the cover, Bayliss lacks illustrations completely whereas de Fourestier begins each section with an elegant drawing of a mineral specimen. Although Bayliss lists fewer synonyms than de Fourestier (30 000 vs. 35 000), it cites de Fourestier (1999) among the references consulted in compiling this glossary, so, presumably, it is more selective rather than less thorough.

Significantly, Bayliss includes a literature reference for every entry, a feature that is lacking in de Fourestier. However, de Fourestier includes a helpful 38 page appendix of incompletely described and unnamed minerals with provisional designations. Considering all aspects of both books, the ease of use, inclusion of references, and price make the Bayliss volume my preference for a valuable working tool.