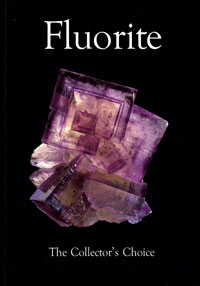 Fluorite: The Collector’s Choice has what is by now an entirely familiar look, and bears a familiar power, for whenever that Look reappears on the collector-literature market (as it does periodically), pulses are quickened throughout the mineral world. A stiff softcover, a page size three-fourths of an inch taller than that of the Mineralogical Record, a front cover showing a beautiful mineral specimen against a field of pure black, a team of editors including Gloria Staebler and Günther Neumeier…yes, this is the next entry in the ExtraLapis English series, Number 9, to be exact.

The work generally follows the established format, offering short chapters on an eclectic mix of fluorite-related topics dispersed apparently casually, even playfully, among chapters devoted to detailed fluorite-locality surveys. Contributing also to the sense of familiarity are the outstanding graphics and photos, including, naturally, photos of fine fluorite specimens, and the fact that a very large number of expert people have made contributions—33 authors, three translators, six editors and 32 illustrator/photographers are credited on the title page. The communal References list contains 94 titles in five languages.
The list of chapters on major provinces from which superlative fluorite specimens have emerged, or are emerging, is thorough: the United Kingdom (Ian Jones), Spain (Guiomar and Miguel Calvo), France (Christophe Lucas), Switzerland (Hans Anton Stalder), the Elmwood mines of Tennessee (Arvid Pasto and Brian Stefanec), the southern Illinois fluorite district (Ross Lillie), Connecticut (John Pawloski), Canada (Mark Mauthner and Frank Melanson), Mexico (Matthias Jurgeit and Peter Megaw), Peru (Rock Currier), the former Soviet Union (Ray Grant and Dmitri Belakovski), China (Guanghua Liu), Pakistan (Dudley Blauwet), Japan (Yoshiro Komuro), southern Africa (Bruce Cairncross) and Morocco (Pierre Clavel and Günther Neumeier). And let us not entertain any carping from partisans of Colorado, Arizona, New York, Germany, Austria, or indeed anywhere else which is not on the list but where Fine Fluorite Is Found: the editors couldn’t have covered all of them, and for every place they do cover they offer top-quality photos of ravishing fluorite specimens, as well as much information on geology and paragenesis, mining histories, landscapes and cultures, etc.

The chapters on fluorite-related topics include a general historical and scientific overview (five authors), essays on fluorite luminescence (Earl Verbeek) and on cleaning fluorite (Rudolf Duthaler), faceting fluorite (Michael Gray), and fluid inclusions in fluorite (Albert Gilg). There is also—and this is part of what I meant earlier by “playful”—a piece by Erich Offermann and Pete Richards called “Fluorite Balls From Hell,” in which a computer-enabled, almost insanely detailed crystallographic analysis is offered of tiny fluorite crystals from Germany which typically look like spheres because they combine the hexoctahedron (48 faces), tetrahexahedron (24 faces), cube, dodecahedron, trapezohedron and (for all I could tell, on a quick read) even more isometric forms, all in more or less equal development. The crystals come from a place in the Black Forest called Teufelsgrund—“devil’s ground”—and the authors discuss the “hexed-octahedron,” and, of course, are inspired to mention that in these studies “the devil is in the details.”

You already have a few, maybe all, of the preceding eight ExtraLapis English booklets; you know that you need to add this one (and the one reviewed below) to your ever-growing collection.
Thomas P. Moore