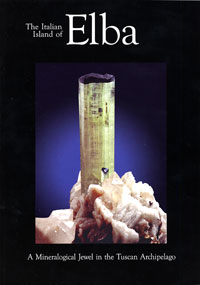 We in the English-speaking mineralogical world are getting spoiled: we have come complacently to expect at least one more beautiful, authoritative and lively entry in the “ExtraLapis English” series each year. Another entry in the series has now been published, this time about a single great and renowned mineral locality. The Tuscan island of Elba is spread before us, with all its scenic-touristic beauty, historical richness, and mineralogical bounty.

Although the island measures only about 20 by 30 km, Elba is in fact two quite separate mineral localities, both justly famed. In the island’s western and central parts, granitic and monzonitic pegmatites associated with the Monte Capanne pluton are host to superb crystal specimens of elbaite, beryl, orthoclase, spessartine, petalite, pollucite and other pegmatitic species whereas along the eastern coast massive deposits of hematitic iron ore furnish some of the world’s finest hematite, pyrite and ilvaite specimens. Less well known are the small lenses of mineralization, associated with the iron deposits, from which have come good specimens of native copper and related copper species.

Elba is the type locality for nine minerals (the most recently discovered of these, riomarinaite, was described in 2005), and it lends its name to two of them: elbaite, of the tourmaline group, and ilvaite (from Ilva, the Latin name for the island). Mineral exploration and mining on Elba date back to ancient Etruscan times; the iron mines furnished ore in quantity to the Roman Empire, and did not entirely cease production until the 1980’s. Collecting of elbaite and other gem species in the pegmatites has diminished since its 19th-century heyday, but good discoveries continue sporadically to be made. Of the thousands of tourists who visit the island each year, many enjoy the experience of digging for pyrite and hematite crystals in surface exposures near Rio Marina which are kept “open” for the purpose. Indeed, one cumulative message of this publication is that, unlike most other classic European localities, Elba remains to some extent accessible and productive, both in its pegmatites and in its iron deposits. One of the book’s more likable features is a series of four small, interspersed sidebars giving accounts of contemporary Italian collectors who have built—and continue to build—significant hoards of Elba specimens, almost entirely through field collecting.

Nearly all of the work’s scholarly heavy lifting has been done by Dr. Federico Pezzotta of the Museo Civico di Storia Naturale in Milano. Pezzotta is perhaps best known as an authority on Madacascar minerals (he is sole author of “Madagascar,” the first of the ExtraLapis English series), but, as we learn from a sidebar in the present work, his connection with Elba goes back to 1977 when, at the age of 11, he began collecting there; in 1989 he discovered and described two previously unknown pegmatites, the San Silvestro and the Rosina, near San Piero in Campo. Pezzotta has written or co-written ten of the book’s 12 chapters, Renato Pagano and Gloria Staebler helping with two of them. The two non-Pezzotta chapters are by Andrea Dini (concerning old legends connected with coastal outcrops of a peculiar schorl-spotted white rock, where ancient Greeks are said to have dropped their “sooty sweat”), and Christina Denison (a one-pager on “Elba’s Snakes,” with photos of four coiled examples). Oh yes, and Günther Neumeier has provided a detailed map of the island, a two-page spread ideal for use by the motoring tourist (I wish I’d had it when I visited for a single, scant day, back in 1984); this map also pinpoints 25 hallowed mineral-collecting sites. Otherwise, the reader is entirely in Pezzotta’s hands, as he tells us about “An Island Steeped in History,” “Elba as a Type Locality,” “Geology, Structure, Evolution of Elba,” “Beyond the Classic Localities,” and, of course, centrally, “Minerals of the Monte Capanne Pegmatites” and “Minerals of the Elba Ore Deposits.” These chapters, supplemented by Neumeier’s big map and by further, even more detailed maps and sublocality lists, provide thorough information on the many sites where notable mineral specimens have been found, with histories of many individual workings, particularly complete as regards the iron-mining region. At the end comes a cumulative bibliography listing an impressive 205 titles from the extensive literature on Elba. Most of these titles, of course, are Italian; the list does not include the 1985 English-language Mineralogical Record article on Elba pegmatites by P. Orlandi and P.B. Scortecci (see vol. 16, no. 5—the “Tourmaline Issue”).

By this time (in our history of being spoiled by ExtraLapis English publications), it is hardly necessary to add that the aesthetic presentation of the work is top-class, and the mineral specimen photography is superb, with about a dozen photographers contributing. Most of the specimens shown belong to private and institutional collections in Italy, and quite a few are Pezzotta’s own, including the specimen shown on the breathtaking cover photo by Roberto Appiani—a pale green, part-gemmy elbaite prism 5.4 cm high rising from a matrix of quartz and albite crystals. This prism shows the black-capped “Moor’s head” terminal zone which is characteristic of, indeed almost unique to, elbaite crystals from Elba. (The black caps have been shown to consist mostly of schorl, while compositional zoning also gives rise to foitite and rossmanite zones; the orange coloration in some elbaite crystals is caused by trace manganese; blue and purple zones, further, are seen in some of the “polychrome” tourmaline crystals, and all these dazzling color-effects are displayed in the candy-luscious photos here.)

The book addresses itself, not only to mineral collectors, but also to potential tourist-visitors, as it offers hints on restaurants and hotel accommodations, together with alluring photos of villages in the pegmatite area, views from hilltops, Mediterranean seascapes and beach scenes, and even casual mineral collectors, aged about ten and upwards, digging for pyrite and hematite in an “open” outcrop of the iron deposit at Rio Marina. You will learn here not only, for instance, that fantastic colorless euhedral petalite crystals to 3 cm have been recently found on Elba; you will also learn how glad you would be if, when next you’re in Italy, you took the ferry from Piombino and drove all around this idyllic island. So you can rack up another hit for the hard-working general-editing team of Gloria Staebler and Günther Neumeier, who have provided what is so far the best general English-language work on one of the world’s most attractive places where fine minerals have been found.