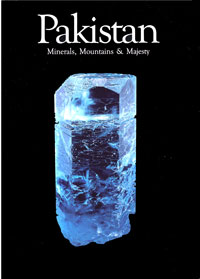 For the theme of their current bravura performance in the English ExtraLapis series, after two rich orchestral concerts on individual mineral species (Calcite and Gold), general editors Gloria Staebler and Günther Neumeier have put a whole mineral-rich country on the program: Pakistan now joins Madagascar (subject of ExtraLapis English No. 1) in getting the well-scored, many-keyed treatment which by now we’ve come to expect from this editorial team.

Actually, Pakistan: Minerals, Mountains & Majesty is the English version (more or less) of the German ExtraLapis No. 24, Edle Steine vom Dach der Welt, i.e. “precious stones from the roof of the world,” and some of the mountainous landscapes shown in the color photographs here are gorgeous enough to divert the reader’s attention for, oh, a second or two at a time from the mineral photographs. But indeed it seems to me that the photos of mineral specimens here set a new, even higher standard for ExtraLapis specimen photography. Most of the pictures are, as before, the work of Master Photographer Jeff Scovil, but perhaps one secret of their exceptional success is simply that their subjects are, almost always, absolutely top-quality mineral specimens, including not only predictables such as aquamarine, elbaite, quartz, topaz, epidote, etc., but also relative exotica like gem zoisite, pargasite, ilmenite, bastnäsite and parisite. Just to flip through the book and look at these pictures is a major aesthetic experience; and if the supernally water-clear aquamarine crystal shown on p. 42 (a Gene Meieran specimen) had only replaced the more deeply colored but etched and somewhat raggedy-looking crystal shown on the cover, all would be virtually perfect (in my estimation) in the photo-selection department.

Another virtue of this publication is that several detailed maps, full-page size or nearly so, of the mineral-producing areas are provided in appropriate places, and in the booklet’s middle there sprawls a double-page map, after Ali (1995) and Blauwet et al. (1987), of the central part of the Northern Areas province. This map, with its ultrafine level of detail (one almost looks for symbols to indicate individual prospect pits or rock dumps) will minister helpfully to the curiosity of collectors puzzling over their labels’ locality data. Like Brazil and Russia before it, and like China even as we speak, Pakistan is notorious for producing confusion about locality names, partly because of the many indigenous languages involved, partly because of dealers’ secrecy, but mostly as a function of the area’s remoteness and its geographical, cultural and political complexity. This ExtraLapis will, of course, not eliminate the problem, but it should at least make it seem more tractable for the average collector, and the work’s very existence might motivate dealers to increase their efforts to get good locality information to pass along to customers. Also noteworthy in this connection is that this English ExtraLapis reprints, as a separate chapter, the Blauwet-Smith-Smith index to localities in the Northern Areas of Pakistan which appeared in the May/June 1997 Mineralogical Record.

In the first three chapters we read three different kinds of histories of trading in Pakistani minerals. In one, student author Tyler Funk surveys the history of the Eurasian gem trade during the past several thousand years or so; as a bonus he shows us a photo of a beautiful aquamarine crystal obtained in India during World War II by Dick Gaines—among the earliest Pakistani mineral specimens (considered as such) known to have reached the west, and belonging now to Herb Obodda. Speaking of Herb, in another of these essays he looks informally back over his career as a mineral dealer, beginning in the early 1970’s, in Pakistan and Afghanistan. In the book’s third opening essay a leading Pakistani dealer, Qari Saeed-ur-Rehmann, speaks through interviewers about his career in the field, emphasizing the manifold ways in which “Obodda was my teacher.”

There follows a short geological chapter in which Bernhard Grasemann and Erich Draganits recount how the Indian plate slammed, and is slamming, into the Asian one, raising the Himalayas, Karakorums and Hindu Kush and giving birth to some of the world’s youngest pegmatite swarms. And then, for four chapters (with that amazingly detailed map in the middle), several authors tell us about, in the words of one title, “picking pegmatite pockets” along a long, winding road from Gilgit to Shengus, Stak Nala and Skardu, then north again via Shigar into the Braldu Valley, and finally to Chumar Bakhoor…it is fun simply to write these words, and greater fun still to see them constellate on the map, while letting the likes of Shafiee Muhammad, Syed Kazmi, Dudley Blauwet and others take one there (on the page), to these Places Of Resonant Names.

The next four chapters are loosely about “gemstones,” though of course the emphasis is on their natural crystal forms (the authors know their audience). Rubies, sapphires and green pargasites from Hunza; rubies from Azad Kashmir; pink topaz crystals from Katlang in the Mardan district, North West Frontier Province; emeralds from Swat; peridots from the Sapat Valley in Kohistan; and the remarkable, gemmy and pleochroic lazulite crystals which probably, although not certainly, come from Laila Camp in the Gilgit district…all these, and their places of origin too, are covered. In the book’s final chapters, Shafiee Muhammad invites everyone to visit the Pakistani Gem and Mineral Show held each October in Peshawar; Vera M. Hammer and Andreas Weerth describe Alpine cleft minerals from Pakistan; Si and Ann Frazier explicate faden quartz; Andreas Weerth and Herb Obodda tell us about the rare-earth species of Zagi Mountain (cf. the Mineralogical Record, May/June 2004); and Dudley Blauwet and Bill and Carol Smith provide the Northern Areas locality index already mentioned.

This fine, handsome work is the product of 16 contributing authors, two excellent translators (Günther Neumeier and Alfredo Petrov) and seven editors, and its communal “Literature Cited” list contains 65 titles. It has all the virtues of earlier English <i?ExtraLapis productions, and not one of their faults that I can think of. It is the most beautiful and alluring “regional mineralogy” I have ever seen, and full of some of the most useful kinds of information for mineral collectors—and the price is right, too. Do you gather by now that I mean to recommend this book very highly? What part of “Wow!” do you not understand?
Thomas P. Moore