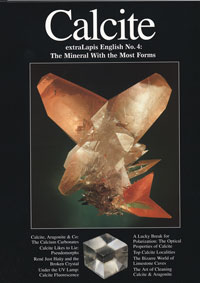 It seems like only a few months ago that I took up the pleasant chore of reviewing Emeralds of the World and Tourmaline, respectively the second and third offerings in the series of English-language versions of ExtraLapis publications on popular mineralogical topics. And now we have a fourth publication, identical in form with the others and easily matching them in beauty, reader-friendliness and conscientious presentation. The editing and translating teams have differed slightly from issue to issue (appropriately, for the changing topics), but Günther Neumeier and Gloria Staebler are still the main organizers, and they have once again created a fine overview, this time, of calcite, “the mineral with the most forms.”

Presumably the appearances of future English ExtraLapises will retain their slight element of fun-surprise, as there’s no predictable pattern to the topic choices. Some subsequent issues will be about whole mineral-rich countries or provinces (as in “Madagascar,” the first of the series) while some will be about particular localities, others about gem varietals (“Emerald”) or mineralogical groups (“Tourmaline”) or single species (“Calcite”).

Calcite opens with a glance at one of those arcane, exhaustive monographs that amateur naturalists of bygone centuries used to self-publish: an album of 1,000 interference figures generated by light polarized by passing through calcite, this the life’s work of a German chocolate manufacturer of the 19th century, Hans Hauswaldt. The keynote for the volume is thereby sounded: it enjoys making little excursions to calcite-related subtopics, many of them historical, such that the progress of scientific understanding is shown. For example, there is an essay by Lydie Touret which presents in a cheerfully balanced way the seminal work of the celebrated French Abbot, René Just Haüy: no, he was not the first to seize on the intellectual concept of the unit cell, and yes, he plagiarized an idea or two and then tried to deny/minimize having done so, and no, he most certainly did not deliberately smash up his entire calcite collection just to make sure of the constancy of calcite cleavage, but yes, he was a tireless worker who was, if anyone was, the father of modern crystallography.

This Haüy essay belongs to a first group of chapters which are, in effect, basic primers in mineralogy, using calcite to illustrate most of the concepts. In these chapters we read of the relations between the rhombohedral and orthorhombic carbonates and between calcite and its orthorhombic polymorph, aragonite; of calcite crystal symmetry, and the concepts of axes, planes and centers of symmetry, and basic crystallographic forms; of pseudomorphism, and pseudomorphing of other species by and after calcite; of optical phenomena like double refraction and the polarization of light; and of fluorescence as a function of trace-element chemistry. The pristine computer-generated graphics and equally crisp, clear text in these chapters will make it a painless experience even for technically challenged readers to review what they know or don’t know about such matters as birefringence, twinning, Miller indices, Snell’s Law, and the relationship between cleavage and crystal structure. This part of the work concludes with a short chapter by Michael Gray on faceted calcites, which nicely sums up what has gone before by explaining why the gemcutter needs to know everything he can about optics and cleavage and crystals if he is to produce such gorgeous objects as the six huge faceted calcite gems pictured with the text.

Then comes the fun part: the necessarily, lusciously lengthy survey of major worldwide localities for calcite specimens. These chapters are, as we’ve come to expect, provided with many dazzling specimen photographs, most of them by the ever-reliable Jeff Scovil, but a good number by others, e.g. Terry Huizing, Steve Smale, Mick Cooper, Debra Wilson and Hartmut Meyer. Here, sticky decisions regarding coverage inevitably had to be made, and I can imagine devotees of Tsumeb, Santa Eulalia, the New Jersey traprocks, the Katanga mines, or cherished old sites like Bisbee, French Creek or Příbram objecting that “their” calcites have been slighted in the text and/or in the “photo gallery” which follows. But what can you do about the ubiquity of calcite? As the editors say, “with innumerable worldwide localities…it is literally impossible to cover them all in a single volume or even review all of the significant deposits.” Anyway, some of the pictures show calcites from quite unfamiliar places: outstanding specimens often seem more outstanding when we see that the locality is, say, the Riber mine, Matlock, Derbyshire, England; Taff’s Well, Cardiff, Wales; the Mershberger quarry, Columbus, Indiana; the Woodlawn quarry, McDowell County, North Carolina; or the Juchem quarry, Idar-Oberstein, Germany.

The major localities which rate their own, separate chapters are a sensible mix of old and new: various recent sources in China; the Deccan traprocks of India; Dal’negorsk, Russia; Cumbria, England; Andreasberg, Harz Mountains, Germany; Maramures, Romania; “the American heartland” (this one could have used subdivision); the Michigan Copper Country; and Irai, Rio Grande do Sul, Brazil.

In the Chinese chapter the author, Dr. Guanghua Liu, provides for contemporary collectors what will seem like a cooling draught after long thirst: a large fold-out map of south-central China with about a dozen calcite-producing mines shown in red, and a generous text in which the geology and the recent collecting history of most of the mines are summarized. As a preliminary reference work on these localities, this chapter is invaluable: I suspect it is typical that, of the three Chinese calcites in my own collection, two of them came with locality attributions totally unlike the ones given here for what’s obviously the material shown in the photos.

Following the chapters on localities, the work has chapters on calcite and aragonite crystallizations in limestone caves; techniques for cleaning calcite and aragonite; calcite as a fossilizing agent for sea urchins and other echinoderms; a bibliography with 68 titles; and the addresses of the 16 authors (and pictures of 12 of them). The limestone cave chapter, we are told on the inside front cover, is the work of Sarah Bronko, a senior at Westover School in Middlebury, Connecticut; similarly, one of the chapters in Emeralds was the work of Zak Swartz, a Connecticut high school junior. Not only is this endearing, it is most appropriate, as one of the purposes of the whole series is to encourage young mineral collectors (and possible future earth-scientists) to participate actively and to do creative research, functioning as honorary adults. Indeed the chapter on limestone caves is as well written and interesting (and as well-illustrated with photos) as the rest of the volume.

My only negative observation about Calcite is a slight one: its chapter organization seems needlessly loose, and its headings somewhat confusing. The typography of these headings, both in the table of contents and in the text, treats as “equals” a rather motley list of topics, some of which are properly main topics while others are informally conceived subtopics. Why, for instance, are there three “main” headings for “Setting the Standard for Beauty” and “A Feast for the Eyes” and “English Calcite: Cumberland Twins and More,” all concerning English calcite but in no typographical way distinguished from “Cumbria: the Legendary Calcite Twins” or, for that matter, from “A Bountiful Harvest of Calcite From the American Heartland” and “Limestone Quarries of the Midwest?” The logical organization that I described as a virtue in the earlier works threatens here to turn into an oh-by-the-way approach, such that the ground is not always mapped out clearly for beginners. A related problem is over-indulgence in “informal,” verging on merely cute, topic rubrics and comments in captions, which elevate cliches like “a feast for the eyes” to the status of categorical concepts. And there could be fewer captions like the one that calls the Sterling Hill mine an “Eldorado,” or the one that says that a pictured (and quite remarkable) German specimen of manganite pseudomorphous after calcite is a “black ugly” which we ought to force ourselves to look at anyway. These gee-wow stylistic mannerisms faintly patronize the reader; they are habitual in some amateur-mineralogical publications, but should be tempered for an international readership.

This minor carping aside, any reviewer who wouldn’t unequivocally recommend this lovely book to any and all readers would be a walking pseudomorph after good sense.
Thomas P. Moore