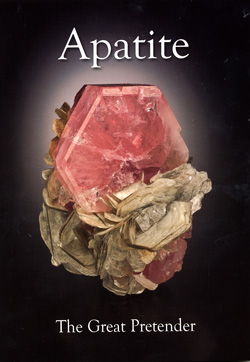 No. 17 in the ExtraLapis English series, this beautifully produced softcover book is devoted to apatite (primarily fluorapatite), one of the most popular collector species. Introductory chapters discuss the minerals of the apatite group, color and luminescence in apatite, the type locality for apatite at Ehrenfriedersdorf in Saxony, and the general geology of apatite occurrences.

The remaining chapters (amply illustrated with many excellent specimen photos) discuss the details of apatite specimens and occurrences in the United States, Canada, Mexico, Brazil, the Andes, Panasqueira (in Portugal), the Alps, Northern Pakistan, Afghanistan, China, Japan, Russia and the countries of the former Soviet Union. The final chapter, primarily petrographic in nature, deals with apatite in meteorites.