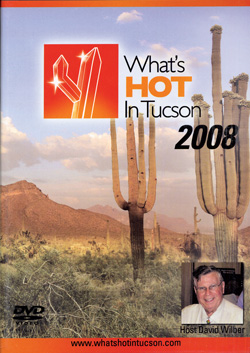 February, 2008: The city of Tucson, Arizona once again comes alive with the biggest, longest, and most prestigious mineral event in the world. Tens of thousands of mineral dealers and collectors from around the world converge on this city in the desert, buying up every single hotel room and taking every rental car available. For over three weeks they will visit as many as they can of over 40 separate and independent mineral, gem and fossil shows held at various locations around the city, culminating in the annual Tucson Gem & Mineral Show at the Tucson Convention Center. The goal: to get a look at over 5 million mineral specimens being offered for sale, priced from a few dollars to hundreds of thousands of dollars, and to see displays of rare museum specimens and private collections from around the world.

And this year the displays at the Convention Center are the most spectacular in the show’s history: The American Mineral Treasures theme brings together over 50 showcases of extraordinary specimens borrowed from America’s finest public and private collections. A once-in-a-lifetime show that will long be remembered.

For an exclusive, true-insider’s look at this phenomenon, mineral collecting pioneer David Wilber takes you to see the hottest and newest minerals, on and off exhibit, and talks with some of the leading dealers as they share their stories and show off spectacular specimens usually reserved only for the eyes of their best customers. Even if you attended the show, you’ll see many things here that you missed.