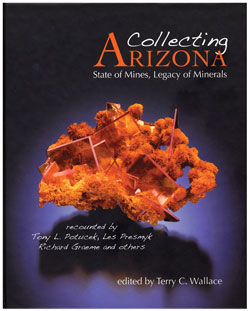 This exhaustive, well organized and beautifully illustrated account of the history of prospecting, mining and mineral collecting in Arizona came onto the scene, not coincidentally, at the beginning of the 2012 Tucson Gem and Mineral Show, the theme of which was “Minerals of Arizona.” Collecting Arizona is a hefty 366-page, full-color, hardcover banquet of information, and it will last much longer, of course, than anyone’s memories of the 2012 show.

The book is no mere “reference work” to be consulted from time to time for stray details, but is readable, and meant to be read, from cover to cover. Although its contents have much to interest the general historian, antiquarian, desert-rat folklorist, economic geologist, mining engineer, lapidary or even crystal-metaphysician, the reader to which it really addresses itself throughout is the serious mineral collector. All of the book’s 20th-century stories from great localities are “recounted” by mineral collectors: “Tony L. Potucek, Les Presmyk, Richard Graeme and others,” as we read on the title page. As we go along, the names of still more “others” appear in connection with sundry adventures in Arizona, these including Wayne Thompson, Gene Schlepp, Mark Hay, Dick Morris, Mike New, Paul Harter, Ray Grant, Peter Megaw, Evan Jones and many more; the general editor is former University of Arizona professor Terry C. Wallace. All of these folks are mineral collectors, and all have made several, or many, important mineral discoveries in Arizona. Together with the hundreds of superb photos of superb specimens, the book creates the feeling that all of the information about Arizona mineral collecting which you could reasonably want to acquire is here, presented and interpreted by the very people you’d ideally choose to do the job.

But far from being a mere compendium of collecting stories, the book has a wide historical purview, with chapters devoted to sequential (sometimes overlapping) time periods from 12,000 years ago to the present. Actually we could say that the story begins in the Precambrian, with a short, early chapter outlining the geological history of Arizona. But the main sequence begins with “Prospects of the Pimería Alta,” a chapter about Paleo-Indian diggings for turquoise and copper in what is now Arizona; about the “first documented discovery of an Arizona ore deposit” by a Spanish explorer in 1583; about the King of Spain’s displeasure with Jesuit missionaries in Arizona in the 17th century; about refugees from the California gold rush who filtered back into Arizona in the 1850s; and about much else besides. From here on the chapter titles largely signal their subject matters: “The New Arizona Territory” (1850s to 1870s), “The Silver Bonanza” (when silver mining was king, ca. 1870 to 1900), “The Rise of Copper” (ca. 1880s to 1900), “Coming of Age” (1900s to World War I, with labor troubles in the great mines), “Depression, War, Recovery” (1920s to ca. 1950), “The Post-War Boom” (1950s to ca. 1975—a very long chapter, for this is when “modern” mineral collecting in Arizona began), “The Postmodern Era” (ca. 1975 to 2000—another very long chapter), and finally “The Centennial State” (the 21st century). Because of the chronological organization, many of the great localities are looked in on more than once, in changing historical contexts. Bisbee, for instance, is seen at the time of the deposit’s discovery in 1877, and of the earliest workings in the Copper Queen mine (in “The Rise of Copper”); then again in its heyday, with accounts of many particular mines’ beginnings (in “Coming of Age”); then again when mines on the Campbell Fault were developed (in “Depression, War, Recovery”); then finally in the days of the Lavender Pit (in “The Post-War Boom”) and during the 1980s, when Richard Graeme and his sons made major post-mining discoveries in the old Southwest mine (in “The Postmodern Era”). Other long-lived localities are treated in the same, very effective, time-lapse fashion, and for each chapter the same map of Arizona has different overlays on it, showing which mines were producing specimens during the time of the chapter’s concern.

Along the way we read of important developments such as the founding and later history of the University of Arizona Mineral Museum, the growth of the Tucson Show, the contribution of Route 66 to the postwar flourishing of the “rockhound” culture, the Arizona career of the Mineralogical Record, and, most affectingly, the lifelong mineralogical activities of Arthur L. Flagg and of the father/son team of George and Richard Bideaux—the book is dedicated to the memories of these three indispensible men. Throughout the book, pictures combine with text in just-right proportions, and in consistently artful layouts.
You don’t have to be an Arizonan to enjoy this book, and you don’t have to be a non-Arizonan to learn much from it that you didn’t know before. Celebrate the Centennial Anniversary of Arizona statehood by buying a copy.