Thomas W. Warner was born in Toledo, Ohio in February, 1915, and grew up in Pasadena, California. He was the son of Nettie and Thomas W. Warner, Sr. (1874-1947), one of the founders of the Borg-Warner Corporation in 1928, a former President of General Motors and a very wealthy man; the Warner home in Pasadena was valued at $300,000 in 1930 and had three live-in servants. Warner (Jr.) collected California pegmatite minerals, especially tourmaline. In the spring of 1935 he and his partner, John Grieger (q.v.), spent eight weeks in Pala, California making an exhaustive survey of the local gem pegmatites, and intensively mining three claims for kunzite spodumene.

"Housed in a special room lined with lighted display cases and shelves, walls adorned with frames of beautiful cut gems, the accumulation is enough to bring forth cries of admiration and tears of envy from the lover of minerals. Each one of the 5,500 specimens is especially selected and beautifully displayed. Mr. Warner specializes in tourmaline, and the greater portion of the collection consists of this mineral, although other material is shown. So far as can be learned, the Warner collection is by far the finest tourmaline collection in existence—over 100,000 carats of gem material alone. Over 75% of the tourmalines are from California localities, but all well-known localities are represented.

"The outstanding examples in the Warner collection are 28 enormous crystals of tourmaline showing the deepest rose color imaginable; these average over 1 pound in weight, some being 6 inches in length and nearly 3 inches in diameter. Five are doubly terminated and many are bicolored; those with rose changing to a fine deep blue are especially attractive. These remarkable and valuable gem crystals were recently recovered from the basement of a lodging house in Los Angeles, where they had remained in storage for over 30 years [since before 1905] and their value unrealized. They had never passed from the hands of the Hiriart family, discoverers of the great tourmaline mines in Pala, San Diego County, California in 1903.

"Other noteworthy tourmalines include a beautiful pink crystal nearly 4 inches in diameter, included in a large, terminated quartz crystal … In addition to the California material, other localities are well represented; Brazil by a choice group of flawless crystals of a deep green color. Second only to the tourmalines come an astounding array of the gem varieties of spodumene from San Diego County, ranging in color from dark violet kunzite, through lilac, straw-yellow, colorless, and blue-green to green hiddenite. Most of the [uncut crystals] exhibit interesting crystal faces, twinning planes and etch figures. [There are] 32 flawless specimens ranging from 1 to 6 ounces in weight, with 15 over 3 ounces each.

"The forms of beryl are well shown, [including] a large emerald matrix specimen, one of the finest aquamarine crystals ever mined at Pala. Two huge, fine-colored morganite crystals from Mesa Grande, California never fail to bring gasps of wonder from the viewers. One of these valuable morganite crystals weighs 3 pounds, and when found was covered with crystals of lepidolite … The other morganite crystal weighs 40 ounces and presents 12 perfectly formed faces … It was one of a pair recently found in an abandoned portion of the Himalaya mine."

Among the miscellaneous specimens of special interest, Amringe noted the following:

[1] A 12-ounce fine blue topaz crystal from the Mount Lily mine at Aguanga, California.
[2] Five fine matrix specimens of benitoite and neptunite with joaquinite.
[3] One of the largest groups of stibnite crystals ever found in the United States (from the White Caps mine at Manhattan, Nevada).
[4] Large 10-pound masses and crystallizations of malachite and azurite from Bisbee, Arizona.
[5] Lavender-colored groups of fluorite from Illinois, with crystals up to 3 inches.
[6] A large representation of carefully selected calcite, marcasite, sphalerite and dolomites from Missouri and Oklahoma.
[7] Hundreds of other localities are also represented.
[6] A beautifully mounted meteoritic iron of exquisite symmetry weighing 84 pounds, the only representative of a fall in northern Tibet; the specimen had reputedly been an object of religious veneration by the local residents for centuries.

In 1936 Warner joined the business (founded in 1930) of his friend and field-collecting partner, John Grieger, under the company name of Warner & Grieger. Money was probably scarce in the Grieger family so soon after the Depression, and it is likely that Warner simply supplied an infusion of operating capital as his contribution to the partnership, and thus he was listed first in the company name.

In March 1937, Warner & Grieger purchased the specimen holdings of the Frank Salmons estate (he was an early pegmatite miner in San Diego County), consisting of a large number of specimens and gem-quality crystals of white, yellow and lilac-colored spodumene. Flawless crystals to 12 ounces and collector-quality crystals to 40 ounces were included in the lot.

In July 1937 it was clear that Warner was traveling on behalf of the company in search of specimens (and perhaps for himself as well); the company announced that "On June 1st Mr. Warner shipped 7 large cases filled with choice specimens" from South America, including terminated emerald crystals in matrix.

Despite his strong interest in minerals, Warner's tangled love life appears to have occupied much of his attention. In 1937, a Los Angeles private detective, Mrs. Pearl Antibus, sued Thomas Warner, Sr. for $1,260,000. Her story: Police hired by Mr. Warner had broken into her apartment and had beaten her. Mr. Warner's reply: The police and agents for the District Attorney had gone to rescue his son, whom he thought was being held captive by Mrs. Antibus and a Mrs. Jean MacDonald (a beautiful blonde divorcee). Thomas Warner Jr.'s explanation: He had hired Mrs. Antibus to ascertain whether or not Mrs. MacDonald's romantic interest in him was sincere or mercenary. Assured (thanks to a dictaphone which Mrs. Antibus had hidden in Mrs. MacDonald's room) that Mrs. MacDonald was sincere, he had gone to visit Mrs. Antibus at her apartment, where Mrs. MacDonald joined them and where police later found her dressed in shorts watching him shave. While Los Angeles newspapers were headlining young Warner as a "love captive," he left on a yachting trip. Asked to clear up the confusion, Mr. Warner Sr. snapped: "I am very much annoyed."

Young Warner announced in October 1937 that he was giving up his night-clubbing ways and was becoming an airplane dealer, selling a fast, sporty model at the Los Angeles Municipal Airport. “I'm in business now and intend to make a success of it,” he said, but that business was short-lived. He divorced his first wife, Virginia, and married Jean MacDonald in Las Vegas the following year. That union did not last either, and following the divorce he married actress Anne Stirling. They divorced as well, and he then married Anita Lipton, who by 1950 was filing for separation on account of Warner's infidelity with a dozen other women.

By 1943, if not earlier, it appears that Warner was no longer actively involved in Warner & Grieger. With John Grieger serving in the Army during the war, his father, William J. Grieger, took over the management of the business. Zoning restrictions forced Warner & Grieger to move in 1946, and when the shop reopened at its new location it was called Grieger's Gems & Minerals, shortened to just Grieger's in November 1946. Warner had no doubt moved on to other things by then; his father died the following year and he inherited a large fortune. Unfortunately he died May 13, 1955, of a broken neck, suffered when he stumbled over a hedge while drunk from a night of partying and fell down a 12-foot embankment at his mother's mansion in Pasadena. His estate was said to be worth about $2 million; much of his fabulous mineral collection went to the California Institute of Technology, and other pieces were retained by family members or were sold.
Click to images to view larger
To contribute more information please E-mail us at:
minrecord@comcast.net
Citation format for this entry:
WILSON, Wendell E. 2022
Mineralogical Record
Biographical Archive, at www.mineralogicalrecord.com 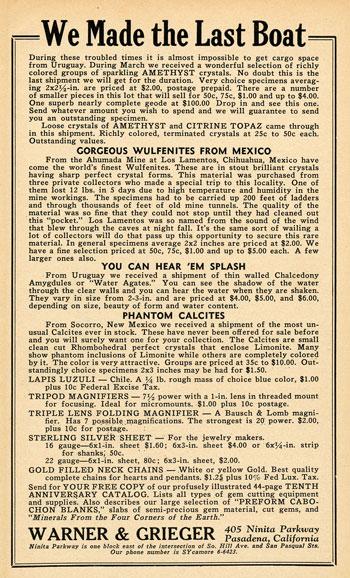