Michael "Mike" Roy Walter was born in Saranac Lake, New York on September 25, 1961, the son of Cora Jean Gonyea and Jay Austin Walter, a station manager for Niagara Mohawk power authority. He began mineral collecting under the guidance of his father, eventually becoming an advanced field collector, a specialist in topographical mineralogy, and a mineral dealer under the company name of Geologic Desires. He lives and collects in northern New York where he teaches geology and earth science at a small public high school in St. Lawrence County. Mike holds a B.A. degree in geology and a Master's degree in education from the State University of New York at Potsdam. He also completed all of the required coursework for an EdD in higher education at Nova Southeastern University in Florida.

Mike spends much of his available time in the field, often accompanied by his father, who is also a mineral collector. Hundreds of specimens which he personally collected are now in the collection of the New York State Museum in Albany. His field collecting methods are noteworthy because, in addition to his expert extraction skills, he also thoroughly documents each dig, and each specimen collected, with equal emphasis given to specimens of collector quality and those of scientific interest. As a dealer his areas of expertise include the minerals of the northeastern United States, especially New York State, Canada, and China.

Mike is an important contributor to the literature of locality mineralogy, particularly in New York. He has published numerous articles in Rock and Gem, abstracts and papers in Rocks & Minerals and a book, Field Collecting Minerals in the Empire State: The Stories of Modern Day North Country Miners. He is a frequent contributor to the Technical Session at the Rochester Mineralogical Symposium. And he includes extensive field trips to interesting mineral localities as part of his high school courses, thereby exposing the next generation to specimen mineralogy.

Mike Walter's personal collecting focus, like that of many collectors, has evolved and narrowed over time. His first principal interest was quartz. From 1995 to 2005 he built a noteworthy collection of specimens from China. Since 2005, however, he has focused on building a fine collection of minerals from St. Lawrence County, New York -- and many of his finest pieces are self-collected.

Mike's mineral specimen business, Geologic Desires, has evolved like his collecting. At one point he maintained a shop in his home, and also sold at mineral shows, and via the internet. In fact, Geologic Desires was one of the earliest on-line mineral sources, having starting in 1996. Today he is an established dealer at the East Coast Gem and Mineral Show, The Rochester Mineralogical Symposium, and the James Campbell Memorial Gem, Mineral & Fossil Show in Albany. As a dealer his areas of expertise include the minerals of the northeastern United States, especially New York State, Canada, and China. 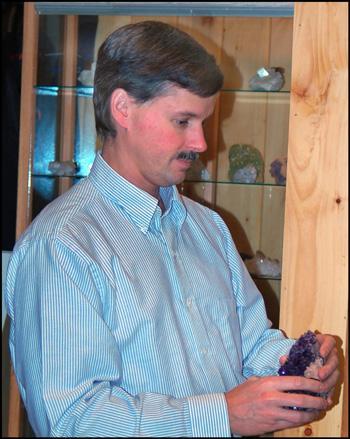