Charles Ivan "Chuck" Trantham was born on August 2, 1936, near Koshkonong, Missouri, the son of Elsie and Melvin Trantham. He was eight when his family moved to the small town of Malta Bend in central Missouri. After graduating from Malta Bend High School in 1953 he enrolled that fall at Colorado State University in Fort Collins. Building on his childhood interest in rocks (kindled by his great-uncle Clyde's colorful stories of caves and treasure) and inspired by an elective course in mineralogy, he turned to the study of Geology. During his time in Colorado, he met and married Audrey Neddo, and together they had two children, Charles Michael ("Mike") and Peggy Lynn Trantham.

Chuck graduated in 1958 with a B.S. Degree in Geology, then followed with a stint at the University of Oregon for graduate studies. There he met Al McGuinness, who became a close friend, mentor and mineral collecting partner for the next 30 years. Chuck's other longtime collecting partners included Steve Pullman, Jeanne Mager, Charles Chesterman, Bob Philips and Jack Parnau.

From 1961 through 1964 Chuck worked for the Army Corps of Engineers in Oregon, primarily focused on dam safety projects. He left the Corps to join the Bechtel Corporation in 1964, precipitating a move to the San Francisco Bay Area, which he called home for the rest of his life. While at Bechtel he was project geologist on several large infrastructure efforts, including the Skookumchuck Dam in Washington, the Brownlee Dam in Idaho, the Centralia Washington power plant, and the Berkeley Hills Bay Area Rapid Transit tunnel.

Throughout the 1970s and 1980s he worked for several other engineering firms, including Morrison-Knudsen and Harlan Miller Tait, most often on dam safety and foundation studies. His work assignments took him to the Congo, Saudi Arabia and Nicaragua, as well as multiple locations throughout the United States and Canada.

Simultaneously with his work assignments, Chuck actively maintained his mineral collecting hobby, leveraging his time in the field near excavation projects to collect specimens. While in the Northwest he took advantage of the opportunity to explore numerous zeolite localities and, at times, to collect with his friend Rudy Tschernich.

Chuck started "CT Minerals" in 1989 and operated as an active mineral dealer until 2019, selling at local and regional California mineral shows as well as the annual Tucson Gem and Mineral Show. He greatly enjoyed socializing with his fellow mineral collectors, and was an active member of virtually every mineral and lapidary club within ready driving distance of his home, including the Bay Area Mineralogists, the Crystal Gazers, the San Mateo Gem & Mineral Society, the Northern California Mineralogical Association, the Sequoia Gem & Mineral Society, the Friends of Mineralogy, and the San Francisco Gem & Mineral Society.

Chuck crossed paths with hundreds of people from all over the world at mineral shows, many of whom became lifelong friends and visitors to his home. Whether at home, at a show or in the field, Chuck was unfailingly friendly and humble, willing to help out and share his encyclopedic knowledge of minerals and their origins. Many a young collector at a show walked away from his booth with a free piece of jade or some other treasure Chuck shared in hopes of sparking their interest.

Chuck tried to include the nearest town or major landmark on his labels, as well as the names of friends who were on the collecting trip. Labels from previous owners or dealers (if any) were preserved in glassine envelope along with any other supporting documentation.

Chuck also separated his numbered thumbnail collection into three groups. One group was his reference collection of over 3,000 specimens that included multiples of the same species, but from different localities. He used this to help him identify the localities of unlabeled specimens. A second group was the P/X labeled collection kept in separate flats. These were considered by Chuck and his friends to be his "extra special" or highest quality specimens, numbering around 1,100, many of which had a green sticker with the admirer's initials (perhaps with a thought of offering it to that person some day). The third group was a set of about 1,200 self-collected specimens plus others from miscellaneous categories. All of the specimens in these three groups were numbered and had a glassine envelope on file.

In addition to the numbered thumbnail specimens, he had another 775 labeled specimens in other box sizes. The final group of numbered and labeled specimens was from his old original collection, with data recorded on index cards and a number in the upper left corner. Chuck was slowly converting them to the new glassine envelope labeling system, but about 150 specimens still remained with the old (early) numbered labels at the time of his death.

His numbered specimens totaled roughly 6,275. There were nearly 4,000 more unnumbered thumbnail specimens with printed labels that Chuck prepared and placed in the thumbnail boxes for his sales stock.

Chuck Trantham passed away in his San Mateo home on February 7, 2020, with close friends at his side and a view of San Francisco Bay. He was buried at Mt. Hope Cemetery beside his son's grave in Waverly, Missouri.

Following Chuck's death, his friends Cliff and Joyce Imprescia and Bill Spence spent several months cleaning out his estate, sorting and pricing his thousands of specimens. Several hundred flats were donated to local rock and mineral clubs, including the Bay Area Mineralogists. Another several hundred flats were donated to the Northern California Mineralogical Association and the Mineralogical Society of Southern California for their micromineral conferences. The bulk of Chuck's collection has been sold to members of the Bay Area Mineralogists, local rock club members and mineral dealers who Chuck had dealings with in the past. A large portion of his book collection has been sold to John Stimson, of "Rocks of Ages," and also to other mineral collectors and dealers. 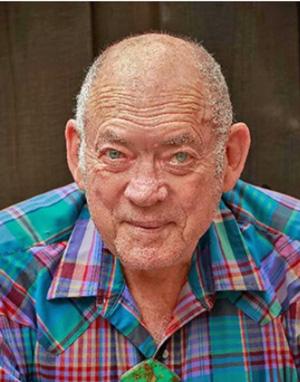 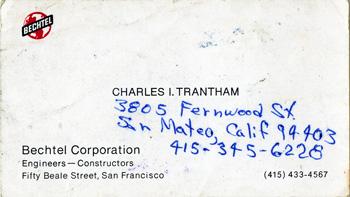 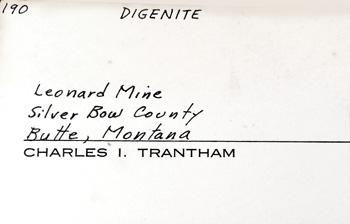 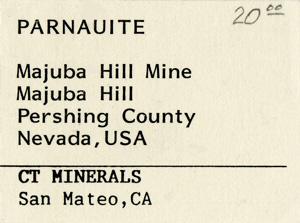 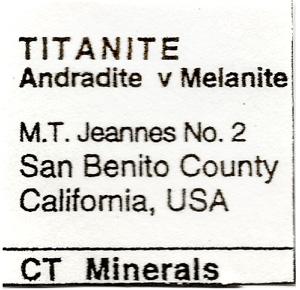 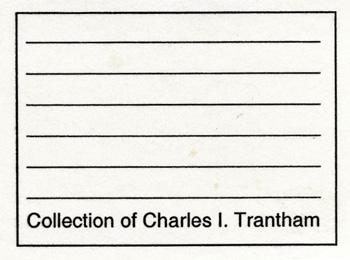