Hermann Staute was born on July 28, 1853 in Abtlöbnitz, the son of Leopold Staute, a minister. He attended the High School in Naumburg and then the universities in Halle and Jena, obtaining his doctorate at the latter institution in 1878. He concerned himself primarily with the study of natural science and particularly with the study of chemistry and mineralogy up to the year 1881, when he was transferred to the laboratory of the royal mine inspector in Stassfurt to work as a chemist. The potash industry was growing at that time, and a rich opportunity for field work was offered, particularly regarding the minerals occurring with the potash salts. His fame as a mineralogist rests solely on his description in 1884 of a single new mineral species, the borate mineral pinnoite from Stassfurt. It remains valid.

Staute relinquished his position in Stassfurt in 1887, in order to head up a brewery in Freyburg, which belonged to his family. After many years of work there he withdrew from the brewery and retired in 1907 to his home in Halle on the Saale River. There he became an enthiasiastic member of the Natural History Society of the Province of Saxony, which later appointed him an honorary member. He worked with the director of the Geological Institute of the University, Geheimrat von Fritsch. He also observed there the first Ammonite, which was later named (on the secret advice of Fritsch) "Arniotites Stautei Fr."

During his years in Stassfurt he made many friends, and was always a kind colleague. He built an interesting Mineral collection, gathering and arranging his specimens for many years. On September 16, 1937 the chemist-mineralogist Dr. Hermann Staute died shortly after completing his 84th year of life.
Click to images to view larger
To contribute more information please E-mail us at:
minrecord@comcast.net
Citation format for this entry:
WILSON, Wendell E. 2021
Mineralogical Record
Biographical Archive, at www.mineralogicalrecord.com 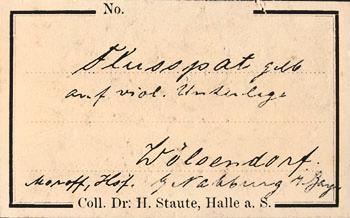 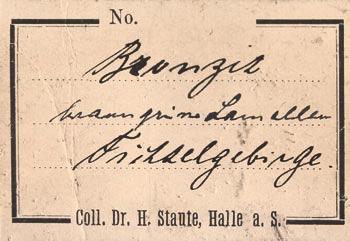 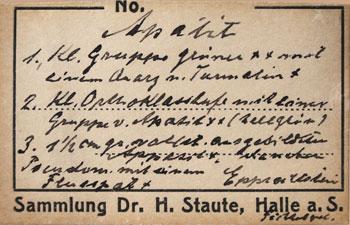 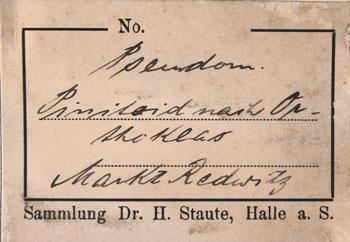 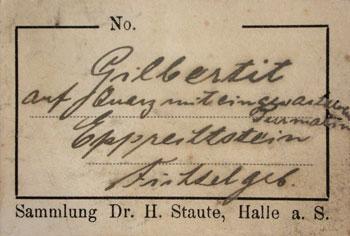