Josephine Louise "Josie" Scripps was born in San Diego County, California on June 28, 1910, the daughter of Josephine Stedem (1886-1959) and James George Osborn Scripps (1886-1921), a wealthy newspaper publisher and eldest son of Edward Wyllis Scripps (1854-1926), founder of the Scripps-Howard newspaper chain. She attended the University of Washington in Seattle, where she took some geology courses and picked up a life-long fascination with minerals. After joining her family's publishing business when she graduated from college, she soon decided newspaper work was not for her and chose instead to take over her family's 4,300-acre Fanita Dairy Ranch in Santee, California.

On May 14, 1954, a catastrophic fire swept through Josie's Miramar, California home, the 20-room mansion built by Josie's grandfather, E. W. Scripps. All of the Scripps family possessions were destroyed. She and her mother, who had taken over her father's publishing empire, then moved to the 180-acre Hi-Hope Dairy Ranch in the San Luis Rey Valley.

Her first major exposure to mineral collecting took place in the 1940's when George Lindsay, Director of the San Diego Natural History Museum, asked her to shepherd a group of six young men (none of whom spoke Spanish as Josie did) on a trip to Alamos, Sonora, Mexico to bring back a skeleton and hide of a rare mountain sheep and anythng else she could get. It was the first time she really tried to collect mineral specimens. When she moved to San Luis Rey in 1954, she got to know the locals through their shared interest in minerals. She joined the San Diego Mineral Society, exhibited at their shows, and took charge of exhibits at the annual fair in nearby Del Mar (she also showed horses and cattle there). Her annual barbecue attracted hundreds of local mineral collectors and helped her make new contacts.

Josie was sent on many more expeditions into Mexico on behalf of the museum; she leased the rights to various Mexican pegmatite mines, and purchased a part interest in the famous Himalaya mine in San Diego County. In 1973 she was made honorary curator of minerals at the San Diego Natural History Museum, succeeding Robert Rowland, who had worked for many years to lay the foundations of a major mineral collection there. Her leadership resulted in the opening of a beautiful and popular display of San Diego County pegmatite minerals in 1979.

Josie was an intimidating presence, with her great bulk and her eyes which tended to look independently in different directions while she was talking. But she was very warm and generous, and became an influential and much-loved personality in Southern California mineral collecting circles. She built an extensive personal collection through purchase and through field collecting with the help of young protégés whom she had taken under her wing (one of whom was Fallbrook mineral dealer William Larson). The north wing of her ranch house displayed her general collection, where large cabinet specimens filled wall cabinets on the north side, Mexican minerals filled display cases on the east side, and on the south side stood a row of cabinets with dozens of drawers of San Diego County specimens. More minerals filled drawers in the living room, but the best pieces she kept in cases in an office off the living room: a world-class benitoite cluster, a huge blue topaz crystal from the Little Three mine, a "blue-cap" tourmaline from the Tourmaline Queen mine, a big Silverton rhodochrosite, and fine Bisbee azurites and malachites, among many others.

Josie was a major benefactor of the San Diego Natural History Museum, and funded the Josephine L. Scripps Hall of Mineralogy, which opened in 1991. The museum's extensive mineral collection (which she helped build) was highlighted in the Hall, in a realistic walk-through mine tunnel containing "pockets" of local gem minerals, and in interactive exhibits that explored properties of gems and minerals, such as crystal growth, radioactivity and fluorescence. She also organized the "Volunteers for Minerals" group to help raise funds for specimen purchases for the museum.

Josephine Scripps died at the age of 81, on May 4, 1992 in San Luis Rey, San Diego County, California. She had not been pleased with her treatment by the San Diego Natural History Museum in her last years and, unfortunately, her many contributions to the Museum were not appreciated by the museum's administration following her death. Changes in the Museum's floor plan were made in 1998, and plans for expanding exhibits in other fields were given priority over the Hall of Mineralogy, the exhibits from which were put into storage. As of 2006 it was not known whether the museum's fine mineral collection would ever again be put on public display.

As for her personal collection, her thumbnails (several thousand specimens) she left to Charles Short, many of which he eventually sold through Marcus Origlieri. William Larson received 400 of her best pieces and 50 cut stones. About 500 mineral specimens and 2,500 faceted stones went to the Gemological Institute of America. The Baja collection went to the Smithsonian, and other specimens went to the American Museum of Natural History, the Harvard Mineralogical Museum, the Fallbrook Museum and the Houston Museum of Natural Science. The Riverside Museum of Natural History received some of her best San Diego County specimens, including her finest Little Three mine topaz and tourmaline specimens. The San Diego Museum received only a suite of "rare uglies" (as she called them) from San Diego County. Josie did not have preprinted mineral labels; she used typed and handwritten labels on blank paper.
Click to images to view larger
To contribute more information please E-mail us at:
minrecord@comcast.net
Citation format for this entry:
WILSON, Wendell E. 2021
Mineralogical Record
Biographical Archive, at www.mineralogicalrecord.com 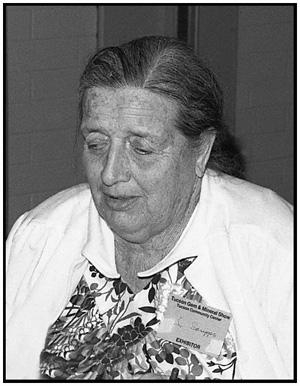 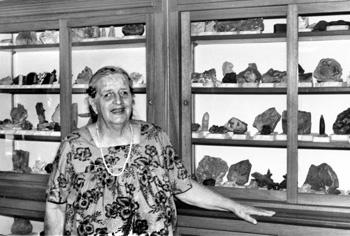 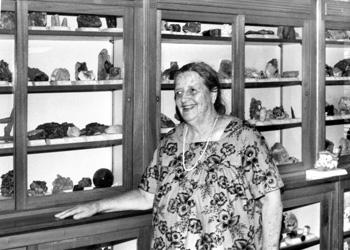 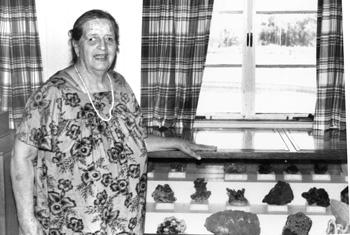