John F. Rakovan was born in Buffalo, New York in 1964, the son of Cindy Ann Janicke and Richard George Rakovan, a broadcasting company executive. John spent his formative childhood years living in Warwick, Rhode Island. He became interested in rocks and minerals at an early age while living in Michigan, where he would frequently collect Petoskey stones and agates along the shores of the Great Lakes with his parents and grandparents. Mineral collecting became a more serious avocation in 1975 when he met Sal Avella, a mineral collector and dealer from Smithfield, Rhode Island; they have been close friends ever since. In 1981 Sal and John were involved in the discovery of the Hopkinton, Rhode Island sceptered amethyst site (see the 1995 article on "Amethyst on milky quartz from Hopkinton, Rhode Island" in the Mineralogical Record).

His interest in minerals led John to pursue geology in collage. He earned a B.S. in Geology from the University of Illinois in Urbana; an M.S. in mineralogy from the University of Illinois in Chicago (where he worked on layer silicate crystallography); and a Ph.D. from the State University of New York at Stony Brook where he studied the role of crystal surface structure on trace element incorporation into apatite during growth. Subsequently, John worked as a postdoctoral fellow in mineral surface science at Virginia Polytech; and since January of 1998 he has been a professor of mineralogy and geochemistry at Miami University in Oxford, Ohio. John has also spent sabbatical leaves teaching and conducting research at Kyoto University in Japan and AGH University of Science and Technology, Krakow Poland (as a Fulbright Research Fellow).

John's research interests involve the integration of mineralogy and low-temperature geochemistry in the study of crystal surfaces and water-rock interactions found in natural systems. In particular, he is interested in environmentally significant processes such as crystal growth, metal sorption, trace element partitioning and other surface-mediated reactions. His research also addresses the structural response of minerals to substituent elements, especially lanthanides and actinides in apatite group minerals. Another growing area of research interest is the formation, mineralogy and geochemistry of hydrothermal ore deposits.

John has published extensively in archival and popular literature with articles on results from original research, mineral localities and mineralogical history. Since 2001 he has been an executive editor for, and regular contributor to, Rocks & Minerals magazine. He has also authored numerous book chapters and was an organizing editor and major contributor to the "Apatite" edition of Mineral Monographs, vol. 17 (2013) Rakovan, J. and Staebler, G. Eds. Lithographie, LLC. Denver. 126 p. and "Phosphates: Geochemical, Geobiological and Materials Importance," Reviews in Mineralogy and Geochemistry (2002), Kohn, M., Rakovan, J., and Hughes, J.M. Eds. Mineralogical Society of America. Washington, DC. 742 p.

In 2007 John was made a Fellow of the Mineralogical Society of America and in 2010 he was honored by the naming of a new mineral, rakovanite, a hydrous sodium decavanadate from the Sunday and West Sunday Mines, Slick Rock Mining District, San Miguel County, Colorado. His mineral collecting interests are varied but he has several foci including apatite, minerals from Japan, and minerals that exemplify interesting properties (e.g. epitaxy, twins, pseudomorphs, luminescent minerals, unusual morphologies).

John is married and lives in Oxford, Ohio. His wife, Monica, is a Ph.D. in geology with a specialty in fluvial geomorphology and surface water hydrology. She has an environmental and geological consulting business, Environmental Solutions (ENSO-AQ).
Click to images to view larger
To contribute more information please E-mail us at:
minrecord@comcast.net
Citation format for this entry:
WILSON, Wendell E. 2021
Mineralogical Record
Biographical Archive, at www.mineralogicalrecord.com 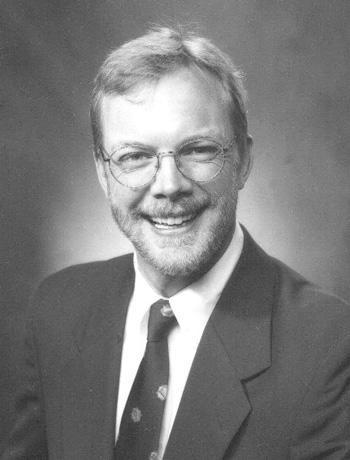 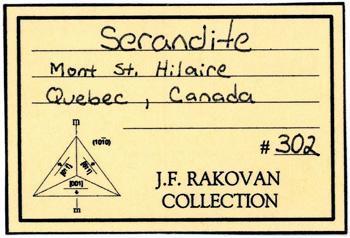 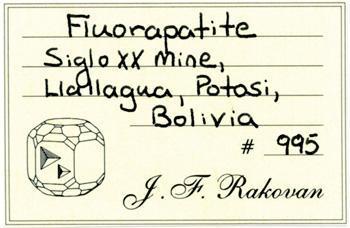