Family background: Ignacio Girona y Targa (1781-1867) was the founder of the House of Girona, a conglomerate of family-owned companies involved in the establishment of banking organizations, mine exploration companies, metallurgical firms, insurance companies, infrastructure works, etc. He was the father of several important industrialists in 19th-century Catalonia and Spain, especially Manuel in Barcelona and Jaime in Madrid and Bilbao. The family businesses continued under some of his grandsons in the 20th century, like Ignacio and Juan Girona y Vilanova, Manuel Henrich y Girona (who had also served as Mayor of Barcelona in 1876), and Carlos Sanllehý y Girona; also under great-grandsons like Joaquin Folch y Girona, and great-great-grandsons like Alberto Folch-Rusiñol y Girona, This amazing longevity of a family enterprise, enduring for more than 200 years, is unique in Spain.

Joaquín Folch y Girona was born in Barcelona in February 1892, the son of Elena Girona y Vilanova and industrialist Joaquín Folch y Solá. He entered the School for Industrial Engineering in 1909, and received his Doctoral degree in engineering in 1916. Throughout his professional life he worked in the chemical industry, involved with the manufacture of alcohol, paints, varnishes, printing inks, and other chemicals, and also flour and ice. When his father died in 1917, Folch, at the age of 25, assumed control of the family business and founded Titan Industries. He directed the electrification of various Spanish mine shafts and facilities near Tarragona, Almadén, and other areas. Becoming prominent in these industries, he was awarded a number of medals and other honors.

Folch pursued his great hobby, mineralogy, for 81 of his 91 years, beginning at the age of ten while visiting mining properties owned by his family. The first of his publications on mineral occurrences was published in 1912, and the last in 1977. While still a young man he was elected to the governing board of the Natural Sciences Museums of Barcelona, was elected Honorary President in Perpetuity of the Spanish Mineralogical Society in 1979, and held membership in many mineralogical societies including the Friends of Mineralogy.

Not reluctant to travel, Folch attended many geological congresses and meetings at locations in Japan, Algeria, Copenhagen, London, France, Switzerland, Italy, Canada, Mexico City, and the United States. He was particularly fond of the U.S., visiting it often and attending the Tucson Gem and Mineral Show every year from 1960 to 1976. He was clear-headed to the end, working in his office regularly until December 1983 and entertaining visiting mineral friends until the day before his death. His son reports that on that day he reminisced . . . "To recall my trips to the United States, its enormous and beautiful nature, my friends there, and the gem and mineral shows, particularly that of Tucson, with the gatherings from room to room in the various motels, sitting down to talk and bargain about mineral specimens, is one of the most pleasant feelings that I can experience now. Should the arthritis in my knees improve, I would still fly there once more."

Señor Folch died of leukemia in 1984. His son, Alberto Folch-Rusiñol, retained his father's collection intact, continuing to exhibit it by appointment at the spacious museum facility which his father built for it in Barcelona. Joaquin Folch-Rusiñol (Corachán), Sr. Folch`s grandson (son of Alberto, and also an industrial engineer) took over the presidency of Titan Industries. He also took over the care of the Folch Mineral Collection following the death of his father Alberto in 1988 and is still president of Titan Industries. He has two sons: Joaquin Folch-Rusiñol Faixat and Albert Folch-Rusiñol Faixat. Both are industrial engineers and represent the 4th generation to have entered the family business, which will celebrate its 100th anniversary in 2017. 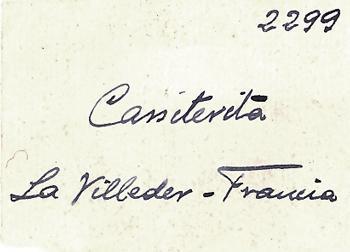