Jordi Fabre i Fornaguera is a well-known mineral dealer on the international scene. Personable and fluent in English (with a clipped Catalan accent), he is popular among collectors of rare and attractive specimens from Spain and neighboring countries. He was born in Barcelona, Spain on April 22, 1957, the son of Maria Fornaguera Botey and Delmiro Fabre Viñals, an administrator. Growing up in Barcelona, he attended the Sagrada Familia secondary school, the Instituto Sant Josep de Calassanç, and the University Central de Barcelona, where he majored in Biology, graduating in 1980. He first began to develop an interest in minerals when he was nine years old, and began building a small collection; when he was 14 he began making trips to Morocco, Portugal and France with his brother Francesc to dig and purchase minerals.

After graduating from college Jordi worked for a while as a printer for the Xaloc cooperative and later for the El Tinter cooperative, but has spent most of his career building his business as a mineral dealer, part-time beginning in 1971 and full-time since 1984. He was among the first dealers to establish a mineral sales website in 1996, which is now a large and successful part of his business. He specializes primarily in rare or uncommon mineral species but also appreciates aesthetic minerals—those combining the two virtues of rarity and beauty being his favorites. He is an experienced field-collector, having dug specimens at Estella, Navarra, Spain (an actinolite-byssolite skarn), Costabona in the Pyrenees Mountains, Eugui (Navarra), and Montseny (Barcelona).

Jordi's first Tucson Show as an exhibitor was in 1990 at the Executive Inn, where he occupied a window-lined office he called "the fish bowl." He was the first Spanish dealer (and one of the few Europeans) with a booth at the main TGMS Tucson Show in 1994 and 1995. He has also been a regular at the Munich Show, Ste. Marie-aux-mines Show and various shows in Spain, receiving over 20 awards for the best specimen or best display in the main Spanish Shows and one award in France, in the Bourg d'Oisans Show, for best specimens displayed. He travels frequently around the world buying specimens and collections, and in the past (though not lately) has often traveled five or six times per year to Morocco, Panasqueira and the Almadén mine.

In 1972 it had been Jordi's good fortune to meet the famous Barcelona mineral collector Sr. Joaquin Folch Girona, who became his friend and mentor until his death in 1984. In 2005 Folch's grandson asked Jordi to act as sales agent for the Folch collection in order to liquidate duplicates (over 10,000 specimens) and recycle the cash generated from the sales to buy top-quality specimens of new finds to add to the Folch collection. Jordi accepted the proposal and in June 2005 started selling the duplicates and purchasing the upgrade specimens--acquiring over 50 new specimens for the Folch collection so far.

Jordi's personal collection currently numbers about 2,000 specimens and counting, specializing in the finest obtainable specimens from Spain, Portugal, Morocco and eastern France. He has numerous specimens from Panasqueira, Hiendelaencina, Almadén, Touissit, Mibladen, Eugui, Aliva, La Collada, Berbes, Villabona (Moscona mine), Spanish Pyromorphites (specially El Horcajo and San Andrés mine), Les Farges and Trimouns, and maintains a good representation of high-quality specimens (comparing well with the best known for each species) of rare minerals from Spain, Portugal and Morocco. He would like to build a collection like that of Sr. Folch's some day, but he realizes that, given his economic limitations, he will have to restrict himself to those nearby countries where he has the best chance to acquire high-quality specimens.

Jordi has contributed to the literature on numerous occasions, including three articles in the Mineralogical Record (a "What's new in Spain" report in 1987, "Fluorite and associated minerals from Asturias, Spain" in 1992, and the Internet Sales Forum in 2006), as well as an article in the Spanish magazine Bocamina (about the Bellmunt mining area, Tarragona, Spain), and frequent reviews of articles for the Spanish magazines Bocamina (as an associate editor), Revista de Minerales and MineralUp. He is also consulted frequently by the French journal Le Regne Mineral, and conducts his own online Forum on his website, where he writes commentary and show reports. He serves officially as a "collaborator" for the Geology Museum of Barcelona, and is a member of various organizations including Geopolis(France), the Russell Society (UK), the Grup Mineralógic Català (Spain), the Grupo Mineralogista de Madrid (Spain), Bocamina (Spain), the Grupo Mineralogista de Aragón (Spain), the MINERESP forum (Spain) and the Asociación de Museos, Grupos y Colecciones de Mineralogía y Paleontología (Spain). Jordi's interests (outside of minerals) include writing and literature, art, music (he studied oboe two years in the Barcelona's Conservatorio de Música), ethology (animal behavior), ethnography, gastronomy, movies, nature and sports (he played federated table tennis in Barcelona for five years). He is fluent in a number of languages including Spanish, Catalan, French, Italian and Portuguese, and is fairly good in English, with notions also of Arabic and Romanian. He is not currently married but he has a 13-year-old daughter, Alba, who is proficient with computers and occasionally helps him with computing problems. 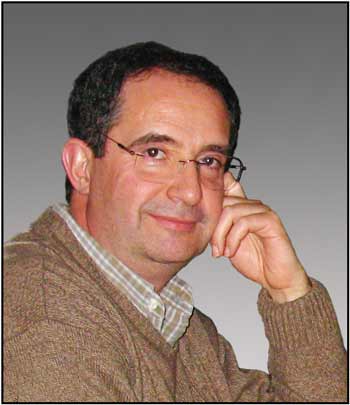 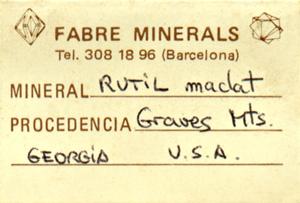 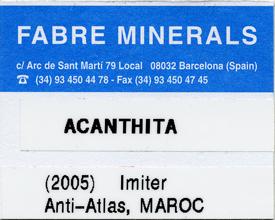 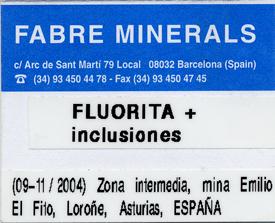 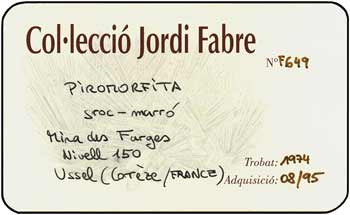 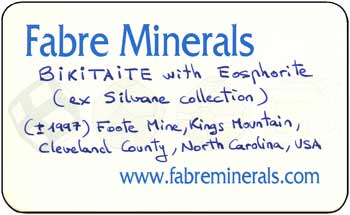