Richard Clarkson "Dick" Erd, well-known California mineralogist with the US Geological Survey, was born in Lexington, Kentucky on February 29, 1924 (thus a leap year baby), the son of Ruth Taylor and Richard Bruner Clarkson Erd, a salesman for a radiator company. During the Depression he grew up as a young boy in the Midwest. His family settled in Dayton, Ohio where he attended High School. During World War II he served as a bombardier in the 72nd Squadron of the 13th United States Army Air Corps, and flew 50 missions in the southwestern Pacific to end his tour as First Lieutenant. Dick met his first wife, Patricia Scott, while on Rest and Recuperation in Sydney, Australia in 1944. He enlisted for 25 more missions so he could return to Sydney and marry her in 1945. They lived briefly in Sydney after the War, then moved to the United States in 1947.

Dick loved music; he sang in many choirs and musicals and played a mean trombone in the kitchen. He believed you could always buck up in life with humor and a song. He hoped the last sound he heard on earth would be a piece of beautiful music. A few of his heroes were Jimmy Durante, Oscar Hammerstein and Perry Como.

He had a life-long love of mineralogy. He received his PhD from Indiana University, then began his career as a mineralogist with US Geological Survey in 1951 in Washington DC. He transferred in 1956 and worked over 40 years with the USGS in Menlo Park, California. He was internationally known for his research in borate mineralogy. In 1979, Dick was given an honorary award from American Federation of Mineralogical Societies for service to the public and to amateur mineralogists. A scholarship was set up in his name for students.

Dick is a coauthor of the description of edgarbaileyite, the first mercury-silicate ever known. He synthesized a compound in 1956 (a hydrated sodium-iron sulfide), which was later discovered in nature in 1977; this very rare mineral was named erdite, in his honor. He was one of the founders of Bay Area Mineralogists in 1972. He also served on the Board of Directors and the Editorial Board of the Mineralogical Record for many years.

Dick Erd died May 20, 2008, in Springdale, Arkansas. He survived three well-loved wives who predeceased him: Patricia Scott, Helen Jennings and Barbara Brown. He was survived by his fourth wife, Dixie Lee Rone of Fayetteville, Arkansas. He said that the legacy he left to the world are his four daughters, Diana Sanchez of Hilo Hawaii, Wendy Erd of Homer Alaska, Corinne McCourt of Sunnyvale California and Barbara Skotvold of Magalia California. He also left seven grandchildren and five great-grandchildren. 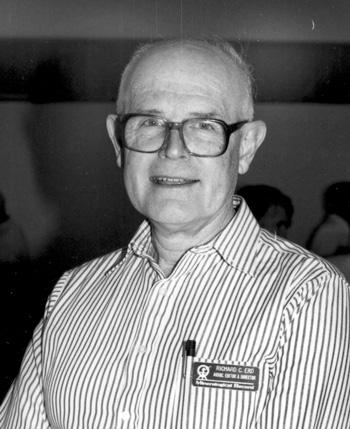 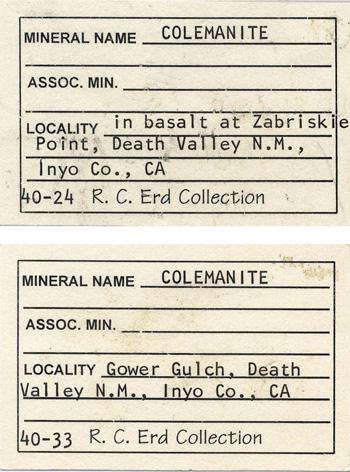