Ralph Waldo Dietz was born in Seattle, Washington on November 27, 1912, the son of Myrtle Jackson and William Dietz, a German-born dry goods salesman. His parents moved to California when he was very young and settled in Piedmont, Alameda County.

Professionally Ralph Dietz worked in the field of optics at the Michelson Laboratory in China Lake, California, and was a member of the Mineralogical Society of America. In 1946 he was living in Inyo-Kern, California, and gave a talk on "the Age of the Earth" before the San Fernando Valley Mineral and Gem Society. In 1957 he wrote an article on fiber-optic ulexite "television stone" for Gems & Minerals magazine, and two other article for the same magazine on the "Play of color in precious opal" (1965) and "Precious opal from California" (1967). In his later years he lived at 1020 W. Kendall Avenue in Ridgecrest, California. He died December 25, 1993 in Ridgecrest, and his mineral collection was sold.
Click to images to view larger
To contribute more information please E-mail us at:
minrecord@comcast.net
Citation format for this entry:
WILSON, Wendell E. 2022
Mineralogical Record
Biographical Archive, at www.mineralogicalrecord.com 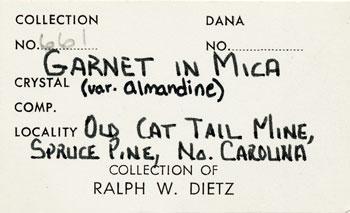 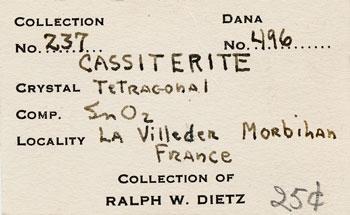 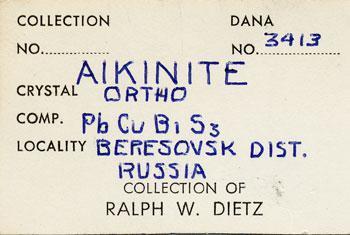