Forrest Ellsworth Cureton II was born April 21, 1932 in Willits, Mendocino County, California, the son of Helen and Forrest E. Cureton, Sr., a trucker. He grew up in Willits until 1942, when his family moved to Watsonville, California where he graduated from high school in 1950. He then took various courses at Hartnell Junior College in Salinas, California and Sacramento City College in Sacramento.

From 1950-1953 he worked as a laboratory technician at Kaiser Aluminum and Chemical Corporation in Moss Landing, California. In 1953 he began working as a California State Highway Engineer (Resident Construction Engineer, Maintenance Superintendent, Chief, Environmental Studies) and retired in 1983. Forrest also earned his black belt in Japanese karate (Renbukai style) and opened his own karate school where he taught for 13 years, until 1978. From 1996 to 2007 he served as full-time volunteer at Empire Mine State Historic Park in Grass Valley, California (as purchasing agent, gift shop work, miscellaneous other positions, and as a member of the Board of Directors for 8 years).

Forrest first developed an interest in learning about minerals in March of 1950. He tells the following story:

I worked in the lab of Kaiser Aluminum & Chemical Corp at Moss Landing, California. I disliked working inside, and went out into the “yard” at any opportunity. One time, Granite Construction Company was seal-coating the area where we stored chromite from the Philippine Islands. There was an extra pile of granite chips and I started throwing these when I noticed a small vein of gold running through one chip. I figured if Granite Construction Company could throw it away, I could pick it up. I picked out a double handful of gold-rich chips and headed back to the lab. There I took a week or so of Mr. Kaiser's and my time to break it all down and separate out the gold. I ended up with a small crucible mostly full. I put it into one of our lab furnaces and “lit it up.” Out poured the smoke and when I decided it was done I pulled it out and found a crucible full of what looked like little rusty iron filings! Fool's Gold! I thought, “nobody should be this stupid!” So I started to study and collect minerals!

In his quest to become a knowledgeable mineral collector he was guided by Norman Pendleton of Santa Cruz and Jack Parnau of Stockton, California. Due in part to these two mentors, his interest has always focused on field-collecting and very strongly on rare minerals. Soon after beginning he was approached by both Ward's Natural Science Establishment (David Jensen) and Minerals Unlimited (Scott Williams and Dave Grigsby) to provide specimen material for them. In a very short time his client list expanded further to include Filer's, George Burnham, Suzie Davis, Walt Miller, Boodle Lane, Harry Sering, The Thurstons, and other retail dealers.

His first wife, Gertrude, had no interest in minerals. Together they had four fine sons, all of them interested in minerals as children. David, their second son, was very interested and was paying his way through college by collecting when he was tragically killed by a cave-in at Gold Hill, Utah in 1971 at age 19. Michael, David's 12-year-old brother, was also at Gold Hill at that time and understandably lost most of his collecting enthusiasm after the accident. Forrest and Michael still go out collecting together about once a year. Forrest field-collected in Canada, Mexico and Alaska starting in the early 1950's. His first overseas trip in 1978 was for three months (he took a leave of absence from his engineering work) to the Philippine Islands, Borneo, Australia and Fiji, all for buying and collecting minerals.

In 1979 Forrest married Barbara Watkins, and she has been a major player in the Cureton Mineral Company since then, even though her college degree was not in the sciences. Her endless goodwill and pleasant, positive attitude gained and retained many customers, and her taste in specimens is impeccable. Forrest and Barbara traveled extensively during the period 1980-1994. They visited, and acquired minerals, in some 43 countries during that period. They traveled in "iron curtain" countries in the early 1980's and first visited China in 1984. They averaged two out-of-country trips per year, working with various museums, schools, scientists, shows and dealers. Their primary interests were always in scientific minerals and meteorites.

Forrest and Barbara sold at their first Tucson show in 1979 and always thereafter until their retirement on January 1, 1994, when they sold their business to Tony Nikischer of Excalibur Mineral Company. For years they sold at both the Denver and Detroit shows, though for only about five years at Detroit. They always attended the Munich Show as buyers (the first two years Barbara attended by herself, always in serious shopping competition with Howard Belsky!). They visited dealers and shows in Czechoslovakia, East Germany, and Russia even before the fall of the "Iron Curtain."

They each had their own mineral collections. Hers, which she still has, consists of about 1,750 fine specimens. Forrest's collection, which he no longer has, was strictly a species (scientific) collection containing approximately 6,500 specimens (2,800 species) including approximately 185 portions of "type" specimens. Roughly 1,800 of his specimens had been X-rayed and/or microprobed. In late 2006, faced with the realization that he was no longer utilizing his collection, he donated the great majority of the "type" material to Harvard University, and with the assistance of Wayne & Dona Leicht, the remainder was sold to Michael Scott for donation to the University of Arizona as a research collection. Nevertheless, Forrest remains very interested in both field-collecting and rare species. His remaining collection at present is limited to a small lot of personally collected specimens plus a very few gifts from friends.

Forrest has contributed informative "letters" for publication in the Mineralogical Record on such subjects as imiterite from California, argentopentlandite, and paakkonenite/paradocrasite. He has co-authored several descriptions of new minerals including dickthomssenite, esperanzaite, mcalpineite and others. He has also co-authored papers on the crystal structures of minerals such as daqingshanite-(Ce), redledgeite and hummerite, and has provided numerous crystallized specimens for structure determination, the most recent being billietite, as well as fichtelite, compreignacite, curite, blatterite, burangaite, gagarinite-Y, ojuelaite, cheralite-(Ce), and simonkolleite. And he provide the pronunciations of mineral names for all editions of the Photo Atlas of Minerals, produced by the Natural History Museum of Los Angeles County. Curetonite, a new mineral from Nevada, was discovered by Forrest and his son Michael, and was named for both of them in 1978.

These days, their three sons, five grandsons and six great-grandchildren use up a good deal of their time! But they are still very devoted travelers, both to visit family members and to try and see a little more of the world, though Forrest's main interest is still minerals. Forrest is a member of the California Association of Mine and Cave Explorers, a certified mine rescue team which operates in northern California and Nevada. He is also currently on the Board of Directors of the Sierra Nevada Mining and Industry Council.

Forrest and Barbara started a small retirement business called The Nature Zone in order to have a commercial license to purchase popular minerals for school children and tourists. This was done, initially, for the Empire Mine State Historic Park in Grass Valley, California. As the minerals became increasingly popular at the Empire Mine, other parks and museums in the area requested that they provide mineral specimens for them as well. Now they provide children's and tourist minerals to four local parks and museums, just to help kids become interested in the earth sciences. 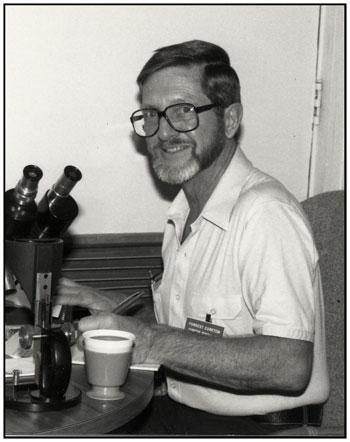 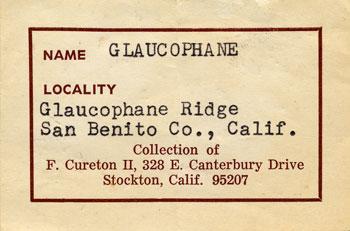 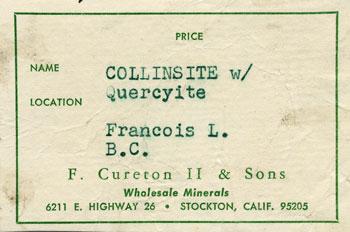 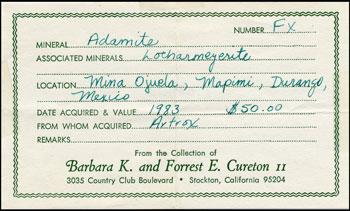 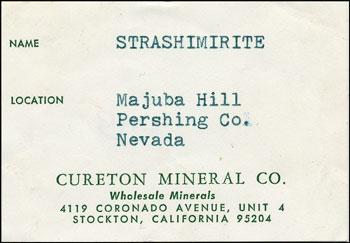 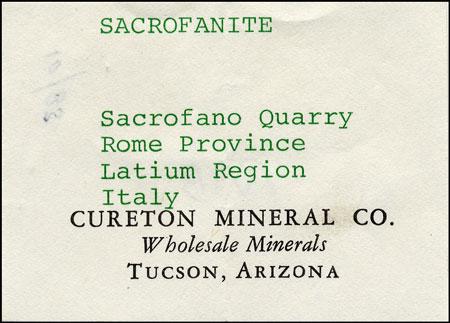 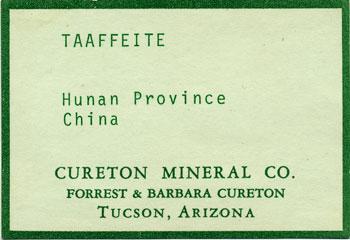 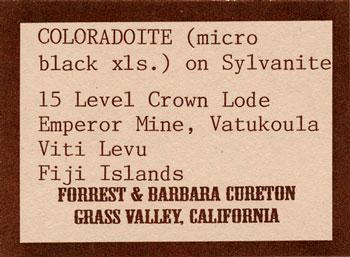