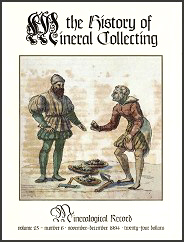 The following review, by Si and Ann Frazier, appeared in the January-February 1995 issue of Rocks & Minerals magazine:

This is one of the most interesting books that we have read in many years. Surveying mineral collecting from its beginnings in the sixteenth century to the arbitrary date of 1799, the book can be opened at random and immediately capture the mineral lover’s full attention.

It is organized into three main parts. The first 155 pages are essentially a chronological arrangement, with a learned but easily read, informative, and often fascinating description of what is known of the sixteenth- through eighteenth-century mineral collectors, their collections, and, in many cases, the ultimate disposition of their collections.

After appropriate introductory material covering the origins of mineral collecting, there is a twenty-page discussion of twelve sixteenth-century collectors, starting with Agricola and ending with Rudolf II. Each is of enormous importance right down to our own time even though their collections have long been lost. Georgius Agricola (the Latinized pen name of George Bauer) was a very learned medical doctor in the Saxon mining towns of Joachimsthal and Chemnitz. He wrote several books, including two of enduring significance: De Re Metallica, an exhaustive treatise on mining, and De Natura Fossilium, the first (1546) modern textbook of mineralogy. This work fortunately was translated into English by Mark and Jean Bandy (whose extensive mineral collection was recently donated to the Los Angeles County Museum). Agricola’s works are so important that Dr. Wilson has dedicated this book to him as “the father of mineralogy and the father of mineral collecting” in commemoration of the five-hundredth anniversary of his birth (1494). Although many scholarly tomes have been written about Agricola, it is fascinating not only to have a two-page recounting of the main points of his career but also to learn details of his activities as a mineral collector; they add a whole new dimension to this very important historical personality.

The section on the sixteenth century closes with Rudolf II (1552-1612), whose enthusiasm for gems and minerals was only matched by his political ineptitude and inattention, which have led some historians to credit to his bungling the eventual outbreak of the Thirty Years’ War (1618-1648), one of the most destructive ever fought in Europe. We learn from Wilson, however, that Rudolf “pursued minerals and gemstones with great enthusiasm, building an enormous collection.” Although his collection was dispersed in 1782, he left a lasting impact on the history of gemology and mineralogy because he employed Anselmus Boetius de Boodt (ca. 1550-1634), his court physician, to expand and tend his collections. This worthy Belgian physician was able to write one of the most learned and influential books in the history of gems and minerals. In 1609 he published De Gemmis et Lapidibus, a book on gems that enormously influenced succeeding generations. It is with sadness that we read that Rudolf’s extensive collection “was not appreciated by his successors” and was in 1782 “packed in barrels and sold off to private parties.”

This section covering the sixteenth century is full of fascinating details concerning a number of giants who are important to historians in general as well as to those with a particular interest in the history of geology and mineralogy.

The seventeenth century unfortunately offers far less of interest and is quickly disposed of in two and one-half pages. The real fun comes with the eighteenth century, which has 108 pages devoted to descriptions of the collectors and collections of France, Great Britain, Germany, the Low Countries, Austria, Bohemia, Hungary, Switzerland, Italy, Russia, Denmark, Sweden, Finland, Spain, Mexico, Portugal, Brazil, and that part of England’s North American colonies that became the United States toward the end of the period. The arrangement attempts to follow the political units of the day rather than the modern map. This section is followed by brief (five pages) but useful treatments of the state of public mineral museums and of the growth of mineralogical societies and journals by 1799.

The second part (42 pages) is a census of mineral collectors (1530-1799), an alphabetical listing of 1,200 individuals whom Wilson has been able to reasonably establish as being mineral collectors before 1800. He has not included people who “primarily curated collections not their own.” This section is not only fascinating to browse through, but it is also a gold mine as a reference because it gives the full name (including noble rank where appropriate), birth and death dates, profession, type of collection, and collecting activities of each person and, where possible, the ultimate disposition of the collections; the addition of last-name and date references enables the reader to get the full reference from the bibliography. Over a period of time, this section will prove to be of immense value to anyone interested in the history of science.

Also in this part is a 28-page bibliography of collection catalogs arranged alphabetically by collector. Wilson states that “generally these are published catalogs…although in a few instances important catalogs which have remained unpublished and exist only in manuscript form are also included.” Forty-five title pages of these often rare catalogs are reproduced; they will surely stir almost unendurable feelings of unfulfilled craving in the hearts of all dedicated collectors. We counted 338 catalogs, a much larger number than we would have guessed were extant. As the compiler states, “Nearly all of these catalogs are extremely rare, and are not listed in the National Union Catalog or other national library catalogs.” This list alone will ensure this book a place on the shelves of anyone seriously dealing in science books or the history of science. “Some of the catalogs exist as only a few copies in European libraries,” or, because the list was compiled in part from secondary sources, “some may not have survived at all.” This compilation is a unique and singular service not only to mineral collectors but to bibliophiles as well. For instance, this is the first listing we have seen covering all the mineral-collection catalogs compiled by J.B.L. Romé de l’Isle (except for the original listing on page 601 of volume 3 of his Crystallographie of 1783).

The last part contains a general bibliography with 469 entries of both books and articles. The author is kind to his readers and cites titles in full without those maddening abbreviations so common in other bibliographies (including the Dana series). Both bibliographies are particularly useful and interesting because the full titles are given, and, in the “good old days” of book publishing in the period covered, the titles were often quite long; in some cases they were like short abstracts of the books. Hence, much useful information about a book can often be gleaned from the title alone. The full titles of journal articles are also given, thus providing the interested reader some clue as to whether or not to expend time tracking down the article. The general bibliography will prove of great value to many readers.

The amount of hard, scholarly work upon which this fine book is based is staggering. In commenting on the difficulties of the project, Wilson states in the preface that “much of the existing literature…was in German, French, Dutch, Spanish, Italian, Swedish, Danish, Slovakian and Latin.” We noticed that there were also a few references in Magyar! To even obtain access to this rare and widely scattered literature would be a Herculean task. To digest it and lay out its interesting and important points for readers is a singular service to mineralogy and to the history of science.

The appeal of this book to mineral collectors is obvious. For the person interested in mineralogy or geology, this book is so hard to put down that it makes Day of the Jackal seem soporific by comparison, so we will not belabor the point in the limited space available here.

It is equally deserving of shelf space in libraries of other interests as well. Because it is an invaluable reference in the history of chemistry as well as in the development of mineralogy and geology, it should be in the history of science section of any good general library and, of course, in the library of any university or college that teaches history or any of the sciences. Because of the discussion of the contents and contexts of the scattered and often very rare or obscure sources of information (some extant only as a single manuscript in the archives of a museum), it deserves a place in every institution where librarianship is taught and on the shelves of reference librarians. Because a great many of the collections and collectors discussed had important focus on the plant and animal kingdoms and often on ethnographic material as well, people in those fields will find much of interest in this unique work.

People in many disciplines will welcome Wilson’s Table 2, which gives the sales prices for forty collections. These prices are in sixteen different currencies. Fortunately, “all European currencies were at that time based on gold. They can at least all be reduced to equivalent gold weights.” He acknowledges the difficulties of assigning exact values but makes the appropriate calculations to give a modern U.S. dollar equivalent for the sales prices of these specimens. Naturally, this information is of compelling interest to those of us who instinctively bemoan the high prices of specimens. We predict that the gold equivalencies of currencies that appear in a footnote to table 2 will be particularly appreciated by people in many fields.

Even if this book had been written in Magyar or Klingon, the pictures would earn it a place on any collector’s shelf. There are 72 portraits of collectors, some in color and many quite rare and unfamiliar to the mineral community. There are 20 pictures of collection rooms and cabinets, and illustrations of 321 specimens—163 in color—mostly from old and difficult-to-access books and catalogs. The printing and binding are of a standard well above that which we have come to expect of modern commercial or government publishers.

The book is as close to error-free and typo-free as seems possible in the real world. With a great deal of effort, we can quarrel with the book on a couple of points. We would like to have a comprehensive index, but it must be admitted that the arrangement does enable one to easily find and correlate information between the narrative section, the census, and the bibliographies. An index allowing the reader to track down information relating to specific elements and minerals would, of course, also be welcome. Basically, there is no practical limit for the amount of work that a reviewer can recommend to an author. Perhaps a more serious objection is that it might have made more sense to extend the period covered through the Napoleonic era, as is more usual in historical treatments of the period. The year 1799 seems to make sense from an arithmetical more than a historical point of view. If the truth be known, however, the only real disappointment is that the treatment did not extend to the day before yesterday. This is a wonderful book that everybody interested in mineralogy, geology, and the history of science will welcome and enjoy. We hope the author will one day also do the nineteenth century.