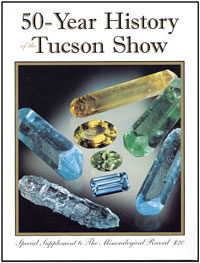 Tucson has become truly “The Greatest Show on Earth,” at least for those of us in the “Mineral World.” No other event in history has tied the gem and mineral fraternities together like the famous Tucson Gem and Mineral Show.

The Tucson Show is the first truly international venue where, once a year, people interested in the collecting, curating, studying and marketing of gem and mineral specimens and materials can gather from the far corners of the world to share their passion. As a catalyst for interaction it stimulates the entire field, no doubt leading to significant increases in gem and mineral discoveries at localities worldwide, mineralogical and gemological research in the laboratory, and mineral collecting as well as lapidary and jewelry work by many thousands of inspired show-goers. The world’s greatest mineral museums, formerly accessible only to local citizens and world travelers, are able to show their treasures to a new international audience, and their often isolated curators have found a new stage and meeting place where they can get to know and exchange ideas with fellow professionals and an eager new population of enthusiasts. And even those collectors who can’t always visit the show each year benefit when their favorite dealers come home loaded with exotic mineral treasures culled from the fresh stocks of a thousand suppliers.

The last half century has seen an unprecedented growth in private mineral collections, much of it attributable to this single annual event. It seems appropriate, then, that the Mineralogical Record should take this opportunity to capture some of the historical details before they slip away irretrievably, and to preserve them in this fascinating and beautifully illustrated book—containing 184 beautiful and often historical color photos of minerals, gems, fossils, showcases, showgoers, show sites and more. In addition, 350 people from the mineral world are pictured, making this book resemble a “yearbook” of our lives at the Tucson Show for the last half century.

Assembling the book has been no easy task, as the Show has never had a formal historian. Fortunately, Millie Schupp and Mary Lou Reed maintained scrapbooks until 1994, and Peter Megaw inherited much historical material which proved invaluable in reconstructing events. Were it not for the efforts of Milly and Mary Lou, and the heroic research of Bob Jones, who has personally attended 42 of the 50 shows, and who wrote the 25-year retrospective published by the Tucson Gem and Mineral Society in 1979, this historical summary could never have been created. His personal acquaintanceship with virtually everyone who has ever been involved in the show, plus his own phenomenal memory, has provided the basis for the work. The Society graciously opened their historical files to Bob. In addition, the Arizona Historical Society Museum Library provided valuable references. And he also conducted interviews and scoured the collector literature (especially the Mineralogical Record show reports) and the Mineralogical Record archives, gleaning many interesting bits otherwise long forgotten. The entire hobby owes Bob a debt of thanks for completing this Herculean task, and thereby giving us back an important piece of our own history.

Thanks to Bob and the many people who have assisted him in his research, we who have enjoyed the “Tucson experience” for so many years can now look back with pleasurable nostalgia and recall many of our own best times, our little victories and successes in mineral collecting, the wonderful specimens we have seen, and also a whole host of old friends and acquaintances, living and dead. It is truly hard to imagine what our lives would have been like all these years without the Tucson Show.
Wendell E. Wilson